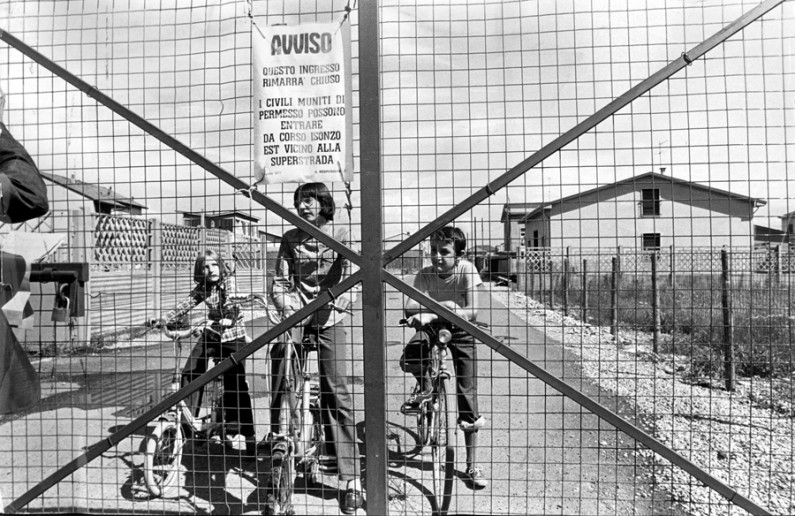 In the following days, the “official” mapping of the restricted areas reached its final conformation, designating areas with a lower rate of contamination named “Zone B,” which also affected the municipalities of Cesano Maderno and Desio, for a total area of 269.4 hectares and a perimeter of 16.5 kilometres. Experts also defined a third zone known as “Zone R” or “Zone of Regard,” as areas not contaminated or were contaminated but with values lower than 5µg/m² that involved an area of 1,430 hectares with a perimeter of 26 kilometres.


More
The mapping of the area was drawn up on 10 August by the state’s Technical and Scientific Commission and approved definitively by the Regional Council of Lombardy on 7 October 1976.
In August, the mayors of Seveso and Meda issued a new set of regulations for the residents of Zones “A” (evacuees), “B” and “R” (of regard).
On 24 August, the mayor of Seveso ordered limited access particularly to Zone A which was for authorized persons only, and banned any type of work that could cause “soil movement and the raising of dust” and the manipulation of whatever materials lay outdoors at the time of the incident. There was a speed limit of 30 km/h on unpaved roads and a ban on the “cultivation or harvest of fodder, grass, flowers, fruits and vegetables as well as animal raising with the exception of pets.” Moreover, all “livestock products with animal origins (milk, eggs, honey, etc.) had to be completely destroyed. In “Zone B” all artisan and industrial activities were suppressed.
Aside from these bans, the mayor recommended that residents of Zone “B” religiously follow instructions like “washing hands carefully and immediately” if by chance allegedly contaminated objects were touched and “even so should wash them frequently throughout the day to eliminate any possible traces of the toxic substance present albeit in small amounts.” Frequent and thorough cleaning of the whole body with the use of soap (daily baths or showers) was also recommended. Prolonged exposure to the sun was discouraged and the consumption of any kind of plant or animals from the contaminated areas was described as “highly dangerous.” Lastly, it was deemed prudent that “persons exposed to the risk of contamination” refrained from procreation within a conservative estimate of a period of six months. In fact, birth defects in children conceived by persons exposed to the dioxin could not be excluded “even if there was still no evidence of this for humans,”
In order to provide all the necessary information to the persons concerned, the mayor announced the presence of a Family Counselling Centre that opened daily in the High Schools of Seveso.
For the residents of the “Zone of Regard,” the mayor reconfirmed with the ordinance of 24 August, what was already provided by the previous ordinance of 18 August, concerning the obligation to intensify personal hygienic norms by the population, the banning of consumption and sale of fruits and vegetables and other products produced in the same area, “Zone of Regard,” and the obligation to slaughter all livestock and refrain from raising them. In the ordinance, the mayor carefully pointed out that zones of security were established to reinforce hygienic measures. In fact, the investigations carried out did not “find the presence of dioxin.” Consequently, the measures indicated were for precautionary purposes in the interest of its residents.