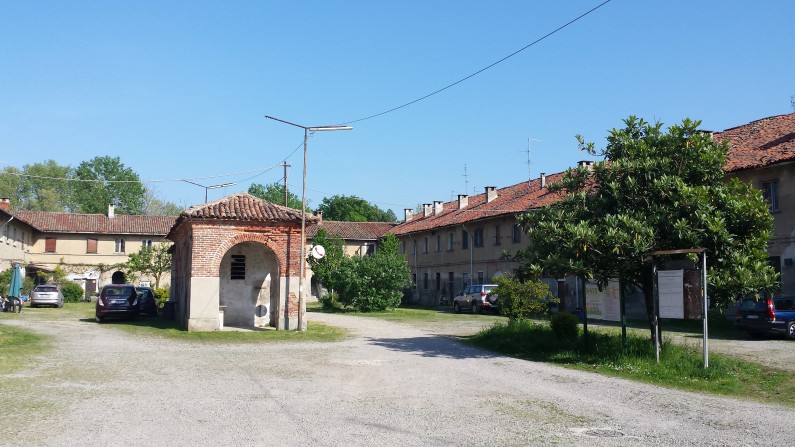 The origins of the town of Castellazzo firmly rest on the past centuries, so much so that the testimonies on houses around the large aristocratic residence date back to the medieval period. Despite numerous historical uncertainties about the origin of the town, some historians propose that it all began with the aristocratic residence itself. Once a fortified farmstead from which it got its name, it also enjoyed economic privileges and tax exemptions.


More
According to the site plan that still exits, the village is divided into four large courtyards: Corte Grande (Grand Courtyard), Corte del Fabbro (Blacksmith’s Courtyard), Corte Nuova (the New Courtyard) and Case Nuove (the New Houses). The village began to be more and more independent from the Villa and had been modified over time by varying the intended use of some parts of the village and introducing new functions, for example, localities used for social gatherings and recreational activities. The long transformation of these localities, which already began in past centuries, is attested to by the same adjectives that accompany the names of the courtyards and annexes of the stables of the 16th-17th centuries. However, the most radical modifications of the village occurred in the 19th century, when it took its present form. At that time there were more than 500 inhabitants, among them farmers, artisans and workers of the ten kilns of which only three survive today.
The village served as a coach entrance that crossed the rustic courtyard and led directly to the stables.
In time the small housing estate became a significant agricultural production complex. The construction of the parish church of San Guglielmo (St. William) assigned to it was attributed to the archbishop and saint, Carlo Borromeo. The church is defined as an independent architectural space but is connected directly to the Villa through a long internal corridor that allowed the aristocratic owners and guests to access the church without leaving the Villa. They could follow the liturgical celebration from a special lodge reserved just for them.
The previous owner of the Villa was the Cusani family. A document relating to its sale to the Arconati family, describes the complex as a collection of “aristocratic homes,” rustic courtyards and “winepress housing” implying the existence of a complex of considerable dimension that surrounded the rustic courtyards.
Nowadays, parts of the courtyards are still inhabited and their walls give a glimpse of original elements and archways of the 16th-17th centuries, that attest to the restorations which occurred even in recent times.