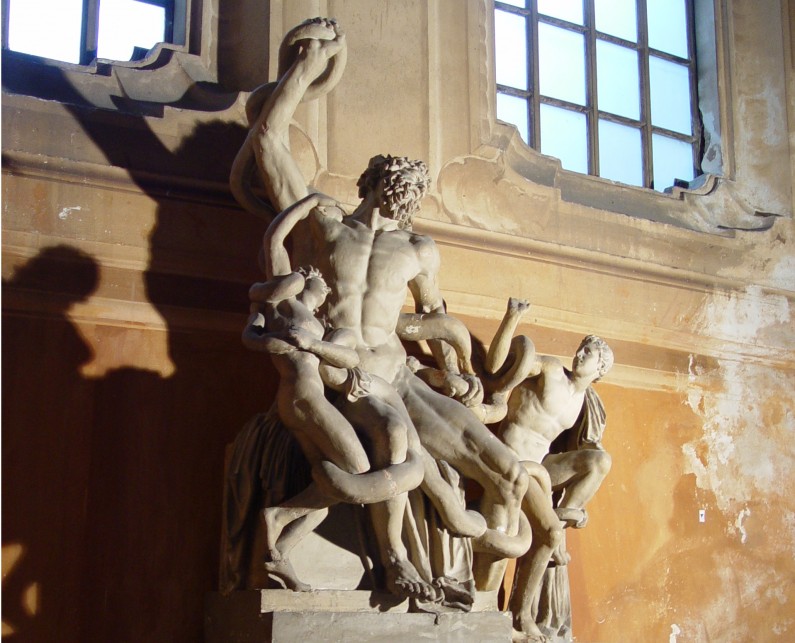 The staircase that connects the ground floor to the first floor of Villa Arconati is a monumental, historically complex construction. Enlightened by two big windows, it consists of two ramps of low stairs in stone and an elaborate balustrade with motifs of different styles. In the passageway is a renowned sculpture enwrapped by coiling marine snakes, representing Laocoon and his two sons, and which is today kept at the Vatican Museum.


More
The volume of the staircase and the ceiling are entirely frescoed using trompe l’oeil, and this decoration was attributed with some doubts, to the famed painter, Giocondo Albertolli. On the sides of the staircase a false architecture painting shows a storiated wrought iron balcony that opens out deceptively to walls decorated with floral stucco motifs. Small cupids are painted on the upper part, sitting in the shell-like niches, while holding shields and their legs dangling, in a wise game of imagination. These alternate with the various paintings, false windows with parapets depicting heraldic stems overlooking the hall, and alternating closed and open windows with curtains that seem to move due to an imaginary gust of wind. . On the staircase vault, through a perspective hole opening out to a false architecture, a blue sky stands out with a monumental, fiery Sun highlighting the carriage of Apollo pulled by horses. Beside him are two figures, a man with a shield, lance and helmet, and a woman seated on the edge of the architecture, observing the scene. On the shorter sides, false curtains move. These are painted with red and yellow stripes that underline the presence of huge composite stems, among which one can distinguish the viscount snake. The renovation works on the staircase are documented by a contract dated 1749, requesting the engraver, Pietro Pirovano, for decorations in Viganò stone for the balustrade which had to be properly engraved and to contain the noble-heraldic stems, probably based on the design made by Arconati himself. These later works are probably connected to the date painted on the wall painting dominating the second access ramp, where the architrave shows the date painted on it as 1865.