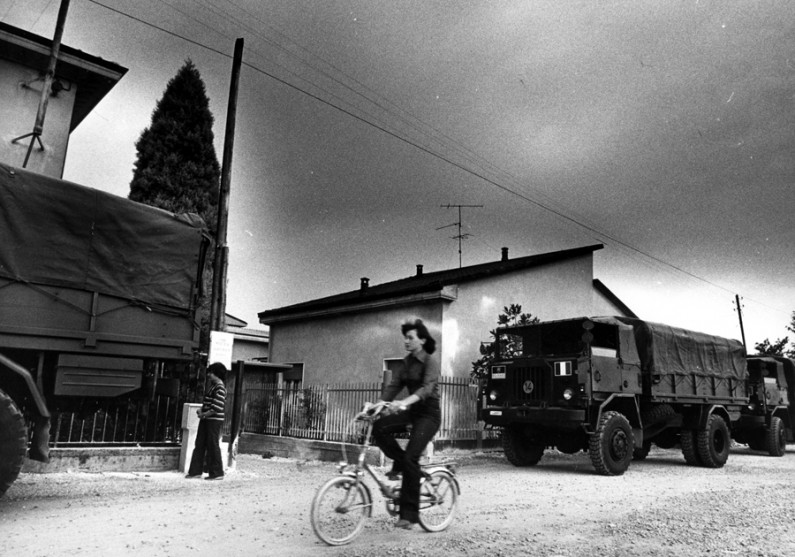 On Monday, 26 July, with the collaboration of the two municipalities and the police, 213 people (176 from Seveso and 37 from Meda) were transferred mostly to the Leonardo da Vinci Hotel in Milan-Bruzzano.


More
The newspaper, “Corriere della Sera,” wrote: “Since yesterday morning, 200 people have been behind barbed wires surrounding the districts of San Piero, and which were laid down by the soldiers of the 3rd Horse Artillery. The military convoy arrived in front of the Seveso Municipal Hall at about 8:30 a.m. Guided by the technicians of the municipality, the soldiers arrived at what the map indicates as “Zone A,” an area of 15 hectares, which was the worst hit by the contamination. Under the pouring rain, the men planted fence stakes to be able to lay down the impenetrable double fences of barbed wire to block access to the area.”
The day after, because of “the worsening situation” the municipality of Seveso was forced to promptly evacuate another 19 persons, including 3 children, to the medical-psycho-pedagogical camp of Cannobbio. In the meantime, there were plans of evacuating another 114 families, that is 398 persons, of which 86 were children. The results of further laboratory tests had in fact recommended that the regional health authorities expand “Zone A,” the width of which was brought to about 1,600 metres.
In the following days the test results led to a second extension of Zone “A,” with an increase of width to 2,200 metres. This expansion led to another evacuation. Altogether, 736 persons (676 from Seveso and 60 from Meda) for a total of 204 families were evacuated from the area and the fencing was carried out in an area of 108 hectares, with a perimeter of 6 kilometres. A farm, 37 artisan enterprises, 10 commercial businesses and 3 industries, with a total of 252 employees, were forced to suspend their activities.
The first appraisals concerning dead animals, killed or used in the tests totalled 2,953. The mortality rate of animals continued and included not only pets, but also pheasants, quail, siskins, goldfinches, swallows and sparrows which were found dead in the fields. Angelo C. who lived in the area, reminisces: “I haven’t seen any swallows since, and when the swallows are gone, it’s a bad sign because something big has really happened. When the incident with the dioxin happened, there wasn’t a single swallow, they were all gone.”
An animal loving police sergeant from Milan confirmed that among the pets, dogs and cats were the ones that suffered the most: “They either suffered a slow death by slowly losing strength or they seemed to go crazy. Cats continually meowed and dogs became aggressive, nervous and unapproachable.”