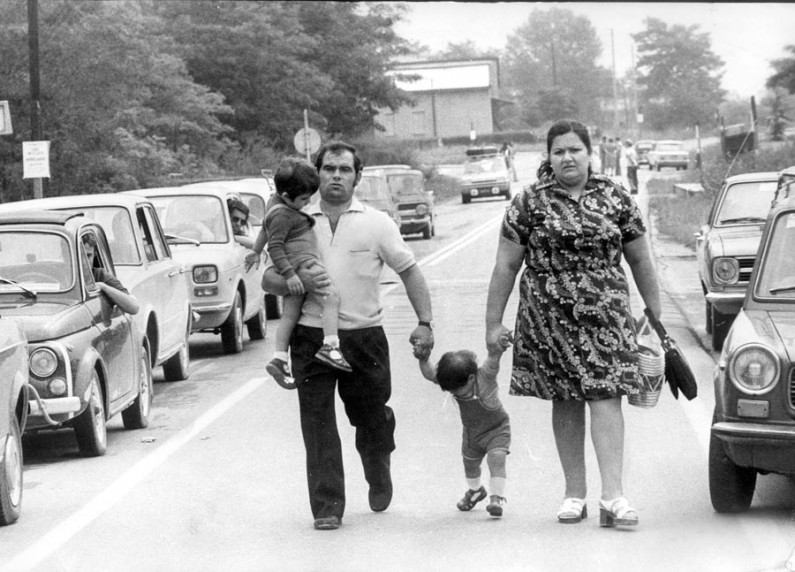 On Friday, 24 July, 14 days after the incident, a cross-check of the analyses carried out by the Italian health services with those of Givaudan laboratories confirmed the presence of a significant amount of tetrachlorodibenzo-p-dioxin in the area worst affected by the toxic cloud.


More
The area was extended, starting from the factory, towards the south for an area of about 15 hectares and a depth of about 750 metres. It was furthermore decided to evacuate the population and fence in the area to avoid access. Thus “Zone A” was born.
With the ordinances numbers 48 and 6 of 24 July, the mayors of Seveso and Meda imposed the evacuation of the contaminated area by the next Monday, 26 July, resulting in the transfer of the families concerned for as long as it was necessary, to allow the decontamination operations. The residents were also prohibited from taking along any personal belongings or poultry of any kind, which would be taken care of by staff of the veterinary offices.
On Sunday, 25 July, a long public statement was issued by the towns of Seveso and Meda and read as follows: “Dear Citizens, the explosion of the ICMESA factory produced and spread through the air a hazardous substance called TETRACHLORODIBENZODIOXIN. The areas most hard hit were those between the streets Certosa and Vignazzola (MEDA) – C. Porta – De Amicis – Fogazzaro – T. Grossi (SEVESO) which have to be decontaminated. To do so without endangering the health of people living in those areas, it is necessary to temporarily evacuate homes, factories and fields. The duration of this evacuation which will be implemented on Monday 26 of current month and will last for the time necessary for the decontamination. The Municipality, in cooperation with the Province, the Region and the State, has organized a series of services including free hotel accommodations. Children up to 14 years of age can enjoy a free vacation at the Institute of Cannobbio at Lake Maggiore; for the transfer, the provisions already given by representatives of the municipality still apply (the meeting place is set in Seveso in Via Adua for Monday morning at 8 a.m). You may contact the special services of the municipality any time starting today, Sunday, 25 July until 6 p.m. You may bring the necessary clothes but which must be chosen from among those which were not exposed on the day of 10 JULY at 12:40, the time the incident took place, and were not used subsequently. The municipality administration has ordered the city to pay each family head the sum of L. 100,000 and L. 50,000 for every dependent family member. The area will be fenced and supervised by health authorities. Decontamination will start immediately. To prevent theft, the police will provide surveillance. Objects from the home and various types of utensils, etc. may not be brought out. All poultry, dogs, etc. must be left in the area and will be taken care of by public veterinary services. Each resident of the area must seek immediate medical care by visiting the clinics especially opened in the Secondary School of Via A. De Gasperi in Seveso. If you have to leave your home for a trip or vacation, you are requested to first pass by the clinic for a check-up and to get the necessary medical attention. For whatever needs you may have, you may contact the Health Services Office in the Secondary School of Via De Gasperi in Seveso or the municipality itself, which remains at your complete disposal.”
ImagesVideoAudio