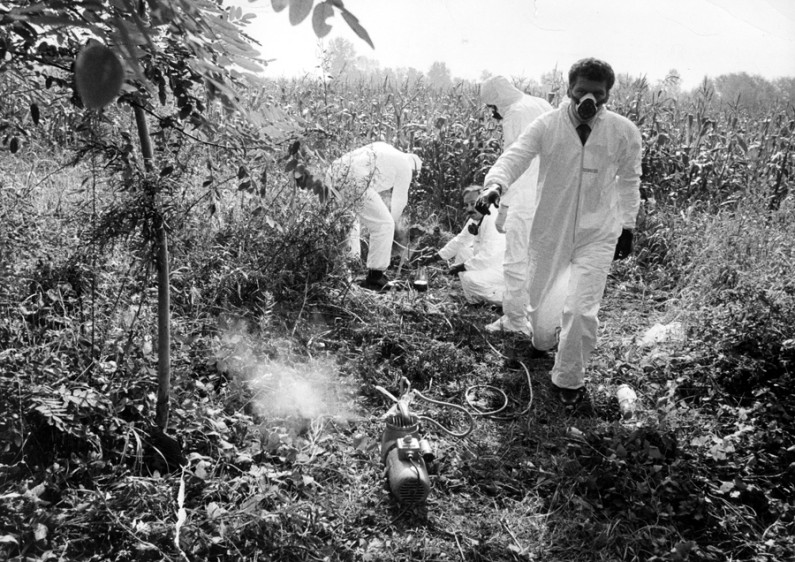 The problem regarding the pollution of the Tarò stream had always been an issue for the Province of Milan which in 1965 carried out new analyses on the stream, and denoted the “inacceptable state” of its waters, considered as very polluted and “highly toxic.”


More
The Province thus declared the need for the industry to improve the purifying system for the processing waters imposed on the ICMESA company in November 1965. However a site inspection in 1966 ascertained that, despite the modifications, the plant continued to give unsatisfactory results.
On 18 October 1969 the Municipality of Meda received the umpteenth report of the Laboratory on the hygiene and prophylaxis of the Milan Province which stated: “Repeated site inspections carried out inside and outside the Icmesa factory in Meda, have led us sto conclude that the situation of the dumping of the factory referred to, has to be reviewed in the light of the results of the new verifications, and was more serious and complex than what was noted up to now, given that the pollution arising from its production works are not limited only to the streams, and therefore of a primary and immediate nature, but extend and multiply with the negative effects deriving from unknown dumping areas, in drip basins outside the factory, of solid, mucilaginous substances and liquids of various and unidentified nature and of combustion in open air, of primitive and uncontrolled products of various types […] These operations, in addition to the many nauseating, insistent and persistent odours covering a range of a few hundred metres that remain in the air and on the clothes of visitors for days, are in fact a continual and constant danger for the aquifers and the Tarò stream itself which flows at just a few metres away […] and greatly concerned, this Laboratory is calling attention to this situation, stigmatizing the absolute lack of preventive measures the company had and has the duty to observe to respect the public property and an elementary common sense. Such catastrophes, ascertained and visible for all to see, cannot be tolerated, nor can the company expect time to pass and for nature to provide.”
On18 December 1969 the health official Sergi, on referring to the report of 18 October, affirmed that ICMESA was a “a remarkable and serious source of serious pollution” both liquid and gaseous. Sergi asserted moreover that “the maleficent action of such pollution” was not limited to the area surrounding the factory, but passed on to the surface aquifer, the atmosphere and via the waters of the Tarò stream, also extended to “zones far away from the source of pollution.” “Given the gravity of the aforesaid results,” the health official asked the Mayor of Meda to issue an order to impose on ICMESA “the adoption of effective, stable and continual measures, capable of eliminating (or at least reducing to the tolerable minimum) the many problems seen.”
At the start of 1974 ICMESA again assured that the Province of Milan and the Civil Engineering Office with respect to the imminent start of construction works for the water purifying plant, which, however was never built, as testified to by a new analysis carried out by the Province on 2 December 1974. The new analyses once again proved the pollution of the stream declaring; “The production waters which ICMESA emits into the Tarò are chemically polluted and highly toxic in the ichthyic and toxic sense. Specific and efficient reclamation works are therefore urgently needed. The company furthermore will provide to efficiently resolve the issue of the sludge, which currently, via percolation can pollute the underground aquifers.”
At the end of 1974 the Technical Director of ICMESA, Herwig Von Zwehl, was sued before the law for “carrying out several and continuative criminal actions in polluting the underground aquifers destined to primary nutriment, even before the same was used, making it dangerous for public health, through the dumping of sludge in a leaking reservoir.”
On 5 September 1975, following a new site inspection, the Province confirmed the accusation of pollution of underground aquifers against the factory in Meda. Despite the Province’s report, on 15 June1976 Herwig Von Zwehl was absolved for “lack of proof.”