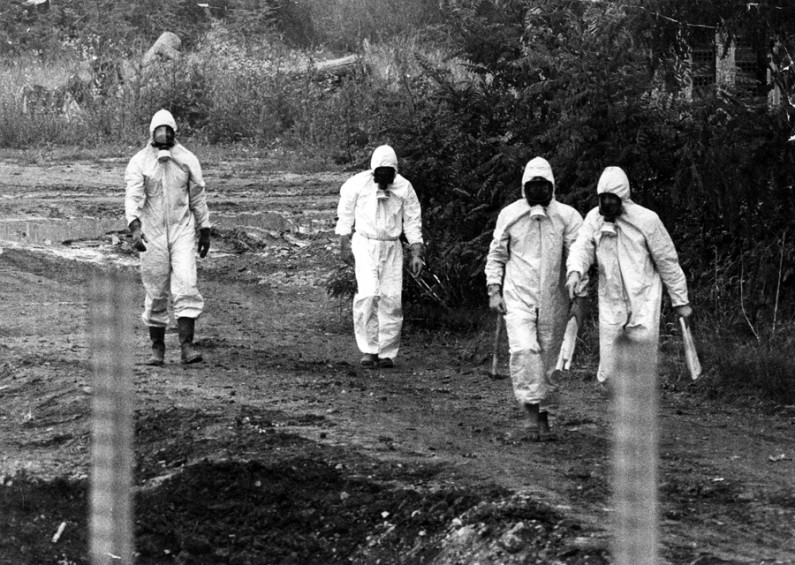 A substitute health official did not detect any harm to persons at the initial verifications on 12 July, but only burns on plants struck by the cloud. On 15 July, Uberti ascertained numerous cases of poisoning and recommended to the authorities to urgently take “immediate steps to safeguard the health of the population.”


More
The mayors of the two municipalities were advised to do the following:
1. Mark the areas with stakes bearing the words: “Municipalities of Seveso and Meda. Caution. Area contaminated with toxic substances. Do not touch or consume fruit and vegetable products, avoid touching the vegetation, soil and all types of grasses”;
2. Inform the population through posters that it is absolutely forbidden to touch vegetable plants, soil, grass and animals in the contaminated area and to maintain the most scrupulous hygiene regarding hands and clothes, using water as the best detergent.
Pending further notice “from the laboratories of the ICMESA factory” on what to do and on the eventual regulations of the prophylaxis prescribed, the substitute health official has the right to order the evacuation of the contaminated area.
On the same day of the communication of Uberti, the mayors of Seveso and Meda declared the areas of the district of San Pietro bordering the ICMESA factory as contaminated with the toxic substance, and as prescribed by the health official, prohibited the population from touching vegetables and plants, soil, grass and animals in the areas of the contaminated zones and urged more scrupulous hygiene measures regarding hands and clothes.