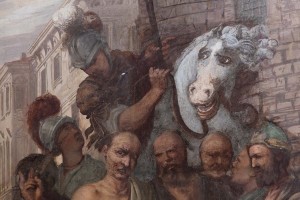 The “Hall of Roman Glory” is the heart of the west wing of the Villa’s first floor. Inside it is a rich, wall fresco decoration with a celebrative-allegorical theme on Rome, laid out in a sequence of eight scenes connected from within to specific frames set above doors and windows. The damage the pictures were exposed to along the years, makes it difficult to distinctly trace the date and the author of the works. However, historians attributed the works to artists that worked on the other halls of the villa, such as the Milanese painter, Antonio Busca, and the renowned panel painter, Giovanni Ghisolfi. There are no doubts, however, as to the direction of the reading, which starts from the north wall and continues counter clockwise.
The first northern panel portrays “Romulus and Remus breastfed by the she-wolf” against a background of woodlands landscape and at the right side, the personification of the Tiber River. To follow is the episode of the “Sacrifice of Numa Pompilius,” showing in the foreground the presentation of the calf with laurel crown and the climb toward the sacrificial fire-pit, against a background of poplar cypresses, plants that were always linked to the theme of expiation.

More
The east wall depicts the actions of two other sovereigns. On the left is the “Construction activities of Anco Marzio” with the building of the Servian wall, the Marzian tower and the first stone bridge; the profiles of the two architects are highlighted, when correcting a design against the background of the port of Ostia. On the right is “The Reform of the Roman Senate,” an evident allegory of the same structure of the Milanese government of which Bartolomeo Arese had become president in 1660. In the panel is also the representation of the entrance of the king, surrounded by the newly instituted lictorals with the relevant bands, flanked by the image of a cart pulled by bullocks, to recall the exile to Tarquinia of those who defied him.
On the left of the south wall was a portrayal of the “Execution of the sons of Brutus,” beheaded on the order of the father for having tried to reintroduce the dominion of the Tarquinii against the Republic. The scene is set upon a grey sky populated with ravens that amplify the macabre tone already underlined by the beheaded protagonists. On the right instead is the painting of “the Destruction of Carthage,” alluding to the changing tides of fate: the city burns on the left side of the composition, while on the right, the Roman commandant, Scipione, surrounded by his officials, declaims the renowned dirge on the transience of fortune.
The west wall is lastly occupied by the vicissitudes of the last two kings of Rome, renowned in the western world both for their warring activities and stature as men of culture. On the left appears the “The drowning of Cesar,” who saves the sword and the book to symbolise the great contributions he gave to war and literature, testified to in an exemplary manner by the scripts. Symbolically the scene also represents the model for correct political administration, since it is based on certified laws written in codes (principle referred to by the book), out of respect for which it is also possible to use force, iconographically referred to by the sword, that also acts as a warning to the enemies of the Milanese senate. On the right is the figure of “Augustus closing the door of the temple of Ianus, instoring peace.” The king, upon returning from the battle of Actium, to celebrate the start of a new era of peace, orders the closing of the Temple of Ianus, one of the oldest italic divinities, harbinger of civilization and the laws among the primitive peoples of Lazio and protector of the moments of transition and new beginnings.