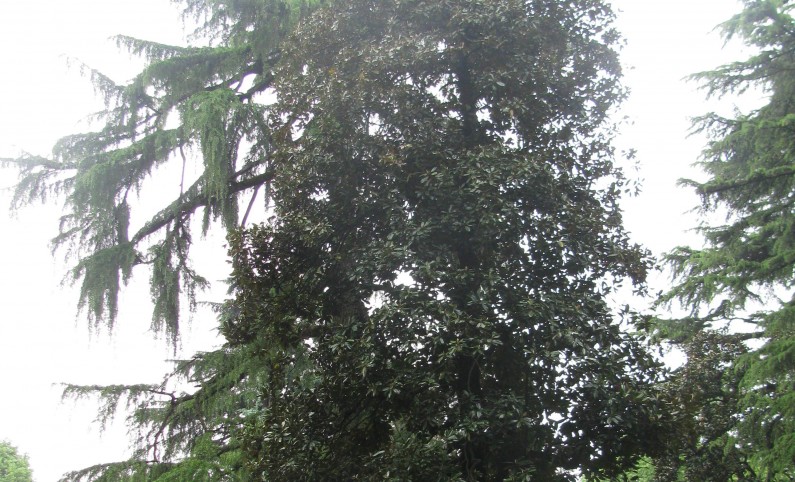 At the main entrance of Villa Crivelli Pusterla in Limbiate, a majestic pyramid-shaped magnolia tree welcomes the visitor to the formal garden, and exhibits its unmistakable tough leaves that are green on the upper side and rusty brown on the lower side, and very fragrant creamy-white flowers.


More
An English writer upon describing this tree essence wrote: “Its flower is simply splendid. I have just looked in the heart of one of them. The texture of its petals is a dense cream; it should not be defined as white since it is ivory, and could you ever imagine the ivory and cream colours combined into a dense paste, with all the softness and smoothness of the skin of an adolescent. Its perfume evokes lemon, and is overwhelming.” The reddish oval fruits are grouped along a central axis of about 10 cm. Once mature, they open to release the bright ruby red seeds with an ulterior intense fragrance.  The first example of this plant reached Nantes in Europe in 1740, brought by a merchant returning from America. The name was given to the plant by Linneo, a Swedish naturalist and doctor, in honour of the French Botanist, Pierre Magnol. Originating from Asia and America, this is a really ancient plant of the Magnoliaceae family, and is considered by scholars as one of the first angiosperms found on Earth, so much so that fossil impressions of magnolias were found, and traced to five million years ago. This majestic and ancient tree species  is characterised by a pyramid shape with a rich crown. The evergreen leaves, with whole edges, are intense green on the upper side and rusty-brown on the lower side. Some are so tough that they crackle only under the rain and only if moved by a slight breeze. The trunk branches out at the base and the bark is grey-green, with a few cracks also in the adult trees. Though the tree can reach about 30 metres high in its land of origin, in Europe it does not exceed 15 metres. It is a slow-growing plant, cannot flower before its 20th year, and has a very long life. It grows well on fresh, acid and siliceous soils, while it fears chalky soils. It may be damaged by frosts. Even if it is a rather delicate species, this tree is renowned in all the country residence gardens. Villa Visconti Borromeo Litta in Lainate, for example, hosts an important magnolia that stands out on the grassy carpet in the 19th-century formal garden that stands just before the entrance to the “Water Tower” of the Nymphaeum, while there are many in the garden adjacent to the Villa Cusani Tittoni Traversi in Desio.