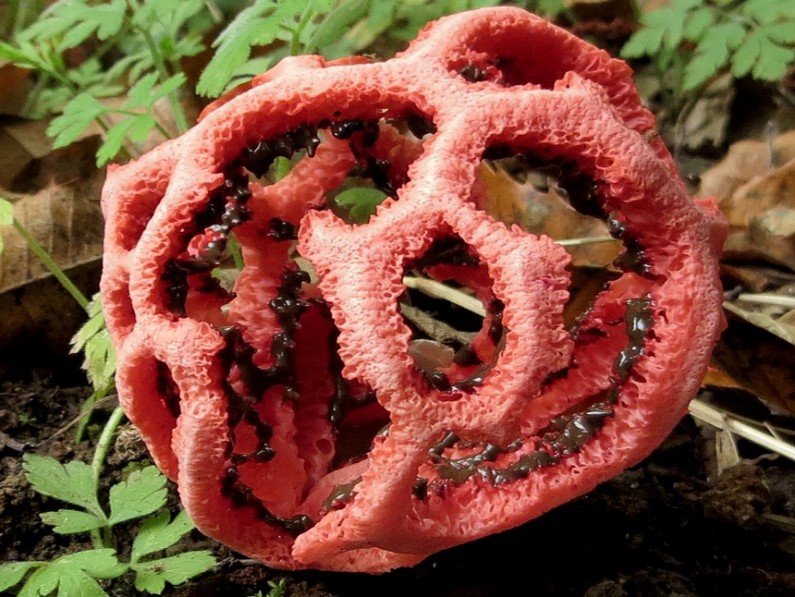 Locally known by the name of lantern Fungus or Witch’s heart, this mushroom belongs to the Clathraceae species. It is quite diffused in the broad-leaf and needle-leaf trees woods of the Mediterranean scrub, and particularly in the hilly strip of the Mediterranean hinterlands that are difficult to find in Lombardy.


More
It can be distinguished by its unmistakable form that has appeared for some years now in the garden of the Villa Crivelli Pusterla, to the great surprise of visitors and students attending the Farm Institute established there.
After surviving the embryonic stage, the lantern Fungus creates an endoperidium structure that resembles a natural basket with large and geometrically irregular wefts. It then takes on square and oval shapes ranging from square, oval, or latticed branches. Its scientific name derives precisely from its form, and in particular, from the Latin terms klàthron (lattice, gate, bar) and adjective ruber (red). On the average it reaches a diameter of 10-12 cm and in the first maturation stages is enclosed in a whitish volva (egg).
Upon maturation the fungus bursts open, changing its colour from scarlet red-orange to grey-green or black, and gives out a disgusting, rotting, cadaveric smell which is very intense and perceivable even from a distance of a few metres. This is a natural and refined system to attract certain types of insects, like the flies that will disseminate the spores.
It was mentioned for the first time in 1592 by the naturalist and botanist, Fabio Colonna, in his famous book entitled, “The torture of plants.” The stinkhorn fungus matures from spring to autumn, even though there are also some cases of late winter growth.
Inedible in its mature state and generally judged inedible or toxic, some unverified sources say that this mushroom is eaten in Eastern Europe, when still in its egg stage.
ImagesVideoAudio