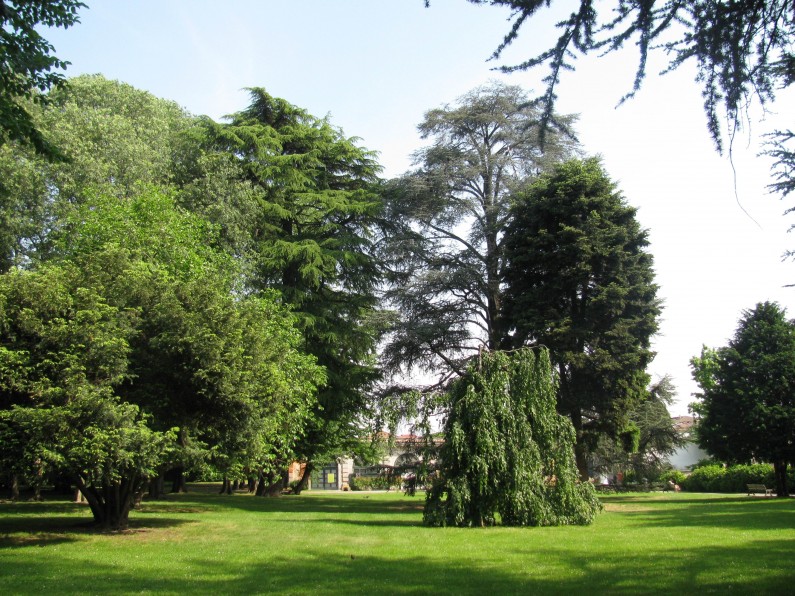 Cedars are certainly the most beautiful conifers that populate the gardens and parks of Lombardy, and need to be planted with lots of green space because of the size that they grow into.


More
Currently there are splendid specimens of the Cedrus deodar, Cedrus libani and the sub-species Atlantica Glauca in the garden of Villa Visconti Borromeo Litta in Lainate, designed in 1808 by the architect, Luigi Canonica..
In spring the hanging branches of the Himalayan cedar have a clear ashen-green foliage, with long, soft and triangular needles. They are very elegant species and despite their size, can suffer from too rigid winters. This conifer is native to the snowy slopes of the Himalayas, and belongs to the Pinaceae family. This tree has a religious significance in its land of origin and is known as the “tree of the gods.” Like other cedars in India it is considered a symbol of fertility and durability, and its wood is used for the construction of temples and palaces because of its fragrance.
In the past centuries these were widespread in Italy and Lombardy, where it was planted in many parks and gardens belonging to noble country residences. This plant is also found in numerous historical parks in the Brianza territory located north of Milan. Together with the Atlas cedar, this plant can be found in the garden of Palazzo Arese Borromeo in Cesano Maderno, where it helps to create a long perspective avenue that connects it to other parts and tree-lined boulevards. As an isolated specimen, it appears in its majestic form at the entrance to the park of Villa Crivelli Pusterla in Limbiate, which was transformed in the later centuries into a provincial psychiatric hospital.
Inside the park of Lainate it is easy to distinguish deodar cedars from other cedar trees because the former has hanging branches with solitary needles that grow on shoots of the current year while needles of older cedars appear in rosettes. Flowers are less frequent than on other species; the male ones are erect and with free yellow pollen in the fall, while the female flowers are green. Similar to large erect cones, their fruits ripen in two years and then dismantle and fall to the ground. Next to the deodar cedar in Lainate you can also see the Atlas cedar, also called “Glaucous” because the needles have an unusual green-silver colour which contrasts with the colours ofthe other surrounding conifers.
Unlike other conifers, the Atlas cedar flowers in autumn, the male flowers are like little pink panicles which fall to the ground in considerable numbers while green female flowers remain at the end of the younger branches. The fruit looks like a cone-shaped wasp nest with a concave apex. It matures in two years and then dismantles.
The branches of this tree are distinguishable from the other cedars because they have ascending branches. The leaves are needles that grow solitarily on shoots of the current year and, only rarely, on shoots of the previous year.
These trees are aesthetically very beautiful; the different species of cedars planted in Lainate in past centuries, constitute a rare opportunity for children and adults to have a more conscious approach towards discovering the biodiversity and heterogeneity of nature.