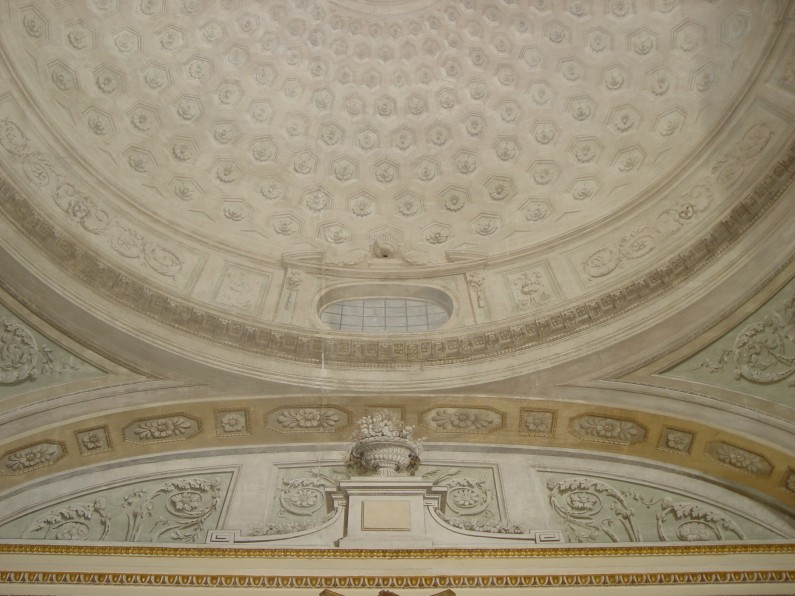 The “Dining Hall” or Levati Hall is an important room of the ground floor; it is one of the best architecturally preserved rooms in the 18th-century wing of the villa.

The floor is decorated with Venetian style mosaic and has coloured bands with rhomboid partitions. Walls and ceiling are frescoed with a variety of ornamental motifs representing faux domes, candelabras and old and grotesque paintings, probably inspired by the same frescoes in the halls of the 16th-century Villa, but made here in monochrome and alternated with a series of symmetrical fluted pilasters
The decoration is the work of painter-decorator, Giuseppe Levati (1739-1828): great lover of Vitruvius and the main traitists of the 16th-century, such as Sebastiano Serlio and Andrea Palladio. Since the early years of his career, the artist had devoted himself to the practice of perspective representation, by promoting a renewal of the pictorial style to counter the Baroque and Rococo styles and move toward a restoration of classicism. The main inspirations of his work were the Roman wall decorations (especially the encaustic paintings of Herculaneum and Pompeii here referenced as the grotesque) and polychrome stucco inspired by ancient history, which made him famous as an interior decorator for the halls of residences of Milan with the title of “general painter of the court palaces.” He landed the commission for the decoration of the parapets of the boxes at the Scala Theatre in Milan. Starting from 1778 he worked for the aristocracy, not only in the capital of Lombardy but also in refurbishing country residences in Cassano d’Adda, Cinisello Balsamo and Lainate, at the height of Lombard neoclassicism. His work was characterized by a great unity of purpose and the ability to blend the different types of decorative elements (painting, sculpture, plastic and furniture) in the rooms.
Unfortunately, in the dining hall, little is left of the original furnishings: two mirrors with consoles in the Venetian style positioned against the short walls, and at the centre of one of the long walls, a niche containing a ceramic heater of uncertain provenance. The chandeliers in gilded wood were commissioned in 1935 by the Toselli family, the last owners of the villa before its acquisition by the city administration; they were modelled after the original piece hung in the “Hall of Virtues.”