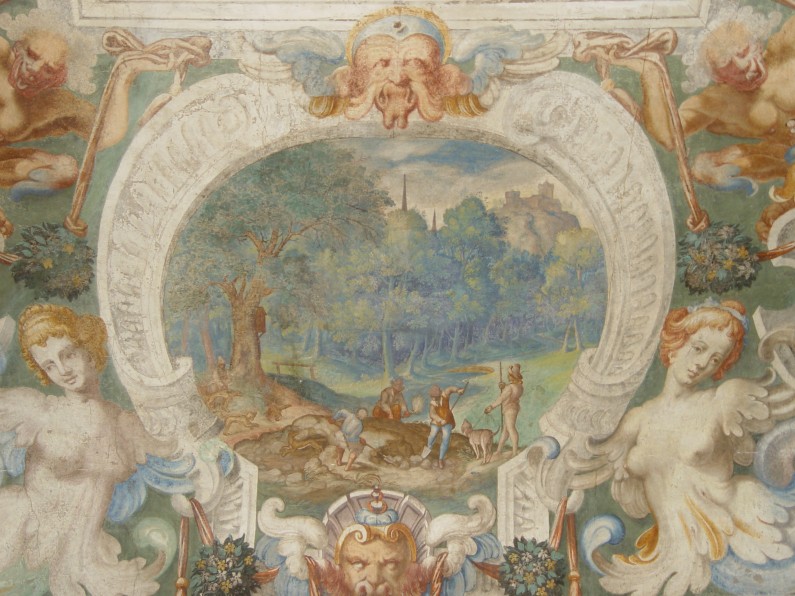 The “Hall of Fortitude” is an extraordinary example of the richness of the decorations of the 16th century wing of the Villa, Its name derives from the fresco set in the centre of the ceiling depicting an allegory of the Virtue of Fortitude.


More
Critiques retain that the painting is the work of Bolognese artist Camillo Procaccini (1561-1629), who worked on the Nymphaeum during the last quarter of the 16th century, and who probably supervised, together with his helpers, on the decorative setup of frescoes on the ground floor of the building. The feminine figure of Fortitude is represented here in a striking view, while she rises against a golden background. The young girl holds a sword in her hands, wrapped by the coiling serpent and a shield on which the head of a lion and a club are depicted, probably alluding to the endeavours of Hercules, mythological hero known for his strength. The girl is wearing a red dress, folding in waves around her legs, and viewed from below. On her shoulders is a wide light blue mantle and her head is partly hidden, behind her shoulder. She is crowned with a metallic helmet adorned with leaves. The figure is surmounted by a long title block bearing a Latin inscription which is now illegible.
Likewise interesting are the “loaded heads” painted by Camillo on the sides of the central frame. The artist, drawing from his experience gained in Bologna at the Carracci workshop, went to Milan led by his great curiosity toward exaggerations of physical features, especially after the first trials conducted by Leonardo da Vinci with his “grotesque heads.” The entire vault, in fact, is particularly rich from the decorative point of view, with the presence of plant and floral elements, monstrous and legendary creatures and wide ancient-style cornices framing out landscape scenes. These bucolic landscapes, with their bright hues and pure lights especially in painting the fronds of trees and in the villages that stand out in the background, betray a certain Nordic taste for fantastic panoramas, traceable to the circulation in the second half of the 16th century of the works of the Flemish artists Paul Bril and Jan Brueghel, popular in Lombardy also by the commissions of Cardinal Federico Borromeo. The particular liveliness of these landscapes, that could not be done without the knowledge of the atmosphere of the “mannerism countryside” painted in Emilia at the turn of the 16th century, led critiques to attribute the work to the younger brother of Camillo, Carlo Antonio Procaccini (1571-1630), appreciated both as a landscape and still life painter. The more difficult task instead is that of identifying the pictorial pieces entrusted to the less renowned Agostino Lodola and Giovan Battista Maestri, so-called Volpino, documented together with Procaccini around 1602-1603 in some payment receipts by Pirro I Visconti Borromeo’s administration.
The decoration of the multi-lobed hall includes very colourful scroll-like and floral-twine embellishments, that frame the allegorical portrayals of mythological divinities. Among these is the image of Cupid, with arch and quiver, intent in picking up an arrow in the hands of a young woman seated beside him and who is embracing him; and the portrayal of a Nereid (perhaps Galatea), a sea nymph, heavily bejewelled, seated on a gigantic sea monster at the top of a grotto that recalls the form of the adjacent Nymphaeum. Also the hood of the chimney is painted with the symbolic representation of the four elements: in the centre of a green lawn, is a lively fire which is about to be extinguished by the rain brought by a cloud drawn in the upper part of the picture. The image is dominated by a title block bearing the Latin inscription in capital letters “Auget” (“intensify”), probably referring to the grandeur of the Visconti Borromeo family.