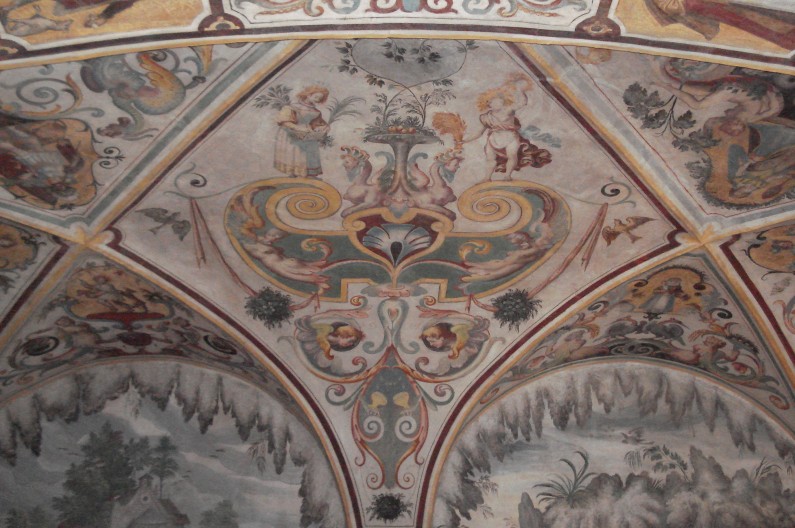 The “Hall of Fortitude” leads to the “Hall of the Archivaults,” which stands out from all the other rooms on the lower floor due to its free concept of space, certainly influenced by its position.


More
Characterised by a depressed groin vault, this hall, in fact, is located under the staircase of honour that leads to the first floor of the mansion and is thus arranged on the floor plan next to the entrance portico leading to the 16th-century wing. Also this room, like the preceding halls of the villa, is characterised in decorative terms, by the same horror vacui or fear of a vacuum.
The vault is decorated with a grotesque-like design, placed alongside the three allegories of the life of man, each indicated respectively with the decade it belongs to, in Roman numerals (X, XX and XXX). Youthfulness is represented by a woman holding an infant in her right hand and a rocking cradle in her left. Adulthood is instead depicted as a young knight in his hunting clothes, with a dog at his feet and a falcon on his left arm, while he holds a knife in his right hand. Lastly, Maturity is symbolised by a richly dressed and bejewelled dame, with a peacock at her feet, intent on observing herself in the mirror held in her right hand. As in the previous rooms, the authors of the decorations enriched the vault with very colourful and elaborate cornices, done with spirals, plants, flowers, birds, insects and fantastic animals populating the white plaster surface.
The walls of the hall instead, show ample landscapes with “Scenes of isolated retreats” framed by calcareous concrete that recall the artificial grottos of the Nymphaeum. In these, great classic ruins or rural villages appear nestling at the peak of small hills immersed in the greens and surrounded by water courses making their way among the rocks. The Nordic taste of these landscapes should not come as a surprise since in Lombardy there was a deeply rooted landscape tradition that drew inspiration from Flemish works, especially those of the artists, Paul Bril and Jan Brueghel.
Though showing an evident stylistic discontinuity with respect to the other neighbouring rooms, critiques could not but recognise also in this hall, the decorative supervision of Camillo Procaccini (1561-1629), who had already worked on the Nymphaeum in the second to the last decade of the 16th century, together with his staff, Agostino Lodola and Giovan Battista Maestri, so-called Volpino, active in the villa between 1602 and 1603. Some historians, furthermore, do not exclude that for the execution of the landscapes, he was helped also by his younger brother, Carlo Antonio Procaccini (1571-1630).