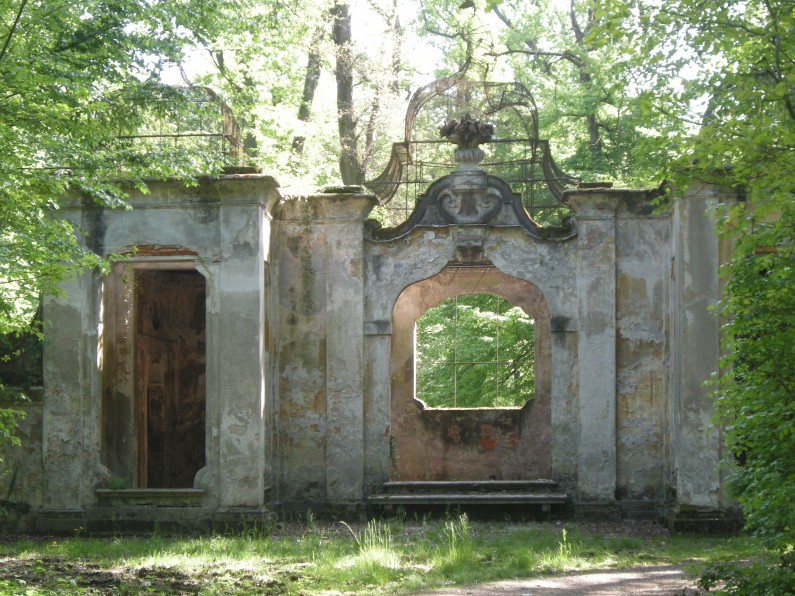 The Aviary, now badly damaged and not in perfect condition, is one of the main brick pavilions located inside the park appurtenance of the villa. Situated on the southeastern edge along the walkway that branches off from the Theatre of Diana, the aviary has lost much of its charm and the glories of the past, although its spatiality can still be perfectly perceived.


More
The small mixed-line building, in fact, consisted of a central room and two smaller side rooms, and was outfitted with large rectangular windows overlooking the main portion of the garden, and a square opening with a sinuous frame, looking out to the back of the building itself.
The aviary was designed as a cage where exotic birds belonging to rare and diverse species were housed and bred. These were much loved by Count Galeazzo Arconati, who had it built in his garden to delight and amaze his guests. This small building also constituted a decorative element of great sophistication appreciated by the culture of the 17th and 18th centuries.
The stone vertical walls, interspersed by slightly protruding pilasters, do not constitute support for a massive traditional façade, here replaced by graceful metal elements now partially destroyed. These allow the birds to get light and air but prevent them, of course, from flying freely into the park. Originally these metal roofings made up three light and soft cupolas that jutted into the sky, recalling the stylistic features of the architecture of the iron greenhouses and pavilions for the delight of this country residence. The interior of the hall was probably richly painted, as evidenced by some fragments of wall paintings and decorations still visible. The exterior, however, should have been characterized by a blaze of decorations in faux marble. Today marked by falling plaster and discoloration, the old aviary has lost some of its original imperious charm, where amazement for the decorations blended with the colourful animated world of rare exotic birds.