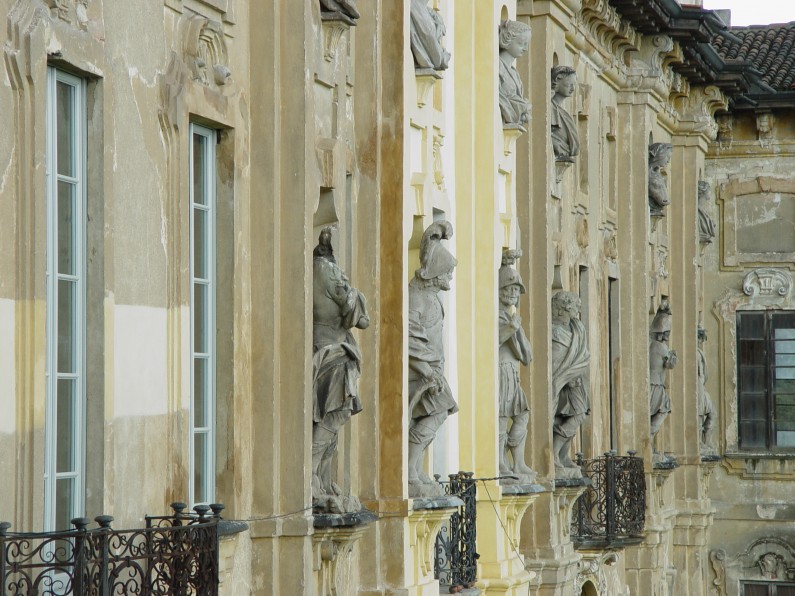 The impressive 18th century façade designed by Giovanni Ruggeri and commissioned by Giuseppe Antonio Arconati, is imposing for its dimension and beauty and also because of the series of statues placed in the first floor inside niches built in the mixtilinear pilasters.
The statues were probably already in the possession of the Arconati family since 1671, well before the start of the renovation of the villa.


More
What was achieved in Bollate, therefore, is a significant example of the reuse of different artistic materials and figurative sculptures. The façade is also a testimony of the great interest the Arconati family had in classical culture and antique sculptures, resulting in the formation of an important collection of pieces from many geographical locations.
The series of eight statues present in the façade and placed along the perimeter of the first floor, shows a wide variety of figures, among which are distinguished warriors, fighters and armoured soldiers, interpreted by historians as representations of heroes of ancient Rome. Some old documents, however, show that they are representations of the important Roman consuls who had helped expand and broaden the Republic of Rome outside the Italian borders. In either case, the façade of Villa Arconati stands as a tribute to the Res publica Populi Romani (the Republic of the People of Rome) and the Milanese government. The reason for this was the important role played by the Senate and high office, which was entrusted to the historic noble families of Lombardy. In this sense, the façade of the building became a sort of political manifesto that seemed to suggest that the same peace and prosperity was possible only if foreign governments recognized the authority and power of individual members of the local noble families. The same Giuseppe Antonio Arconati in 1927 was appointed member of the Council of Sixty Decurion of Milan, and like many members of the nobility of Milan, received numerous diplomatic assignments, including that of ambassador. Furthermore, the Arconati family set itself up as an essential element in the political mediation between the nobility and the Austrian government, just like what Giuseppe Antonio did, as ambassador extraordinaire in Parma, in behalf of the Farnese family.
Despite the different interpretations of the individual sculptures, these statues present in the façade are a rare and important example of three-dimensional sculptures, used as decoration for the walls of aristocratic villas that help put some movement in the otherwise rigid modular span of the perspective through the representation of clothed male figures in different poses. Above each statue, the sculptor inserted busts of female figures that rest on protruding corbels which extend from mixtilinear niches. These busts are strongly connected to the underlying statue as they represent the province conquered by each consul or hero depicted. To further enhance the scenic complex, animals were added next to the bust to provide useful iconographic elements to define the name. Among these were exotic animals like lions and more common animals found in Lombardy, like the wild boar.