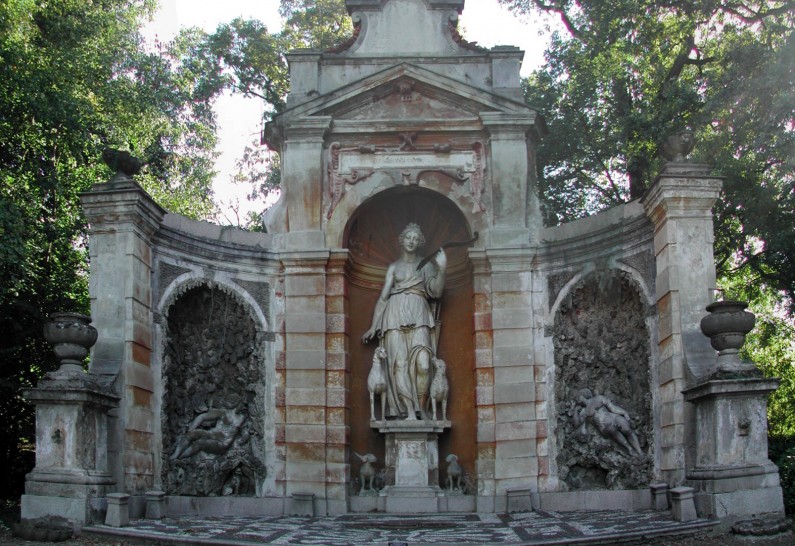 The Theatre of Diana, located in the eastern part of the park adjacent to the villa, was built around 1624 and was one of the first extensive and decorative works on the complex of the “villa of delight” commissioned directly by Galeazzo Arconati. The statue of the goddess of the hunt and beasts, protector of wild animals, and guardian of the water resources and streams, is modeled in stucco according to the classic norms of 17th-century iconology, strongly influenced by coeval portraitures and the work of Cesare Ripa.


More
Almost five metres high, the portrayal of Diana is set in a niche with shell-like apses and inserted into a stone architecture characterized by a central opening and two smaller niches also hosting the figures of nymphs. On the right, a seemingly half-lying feminine figure is seen. On the opposite side, the nymph is turned towards the goddess while simultaneously at her feet, a dog is seen peeping out from the rocks below. The two niches in the background reveal the protruding rocks from which the slight figures appear.
The architectonic and sculptural planimetry of the Theater of Diana certainly does not constitute the servile reproduction of linguistic style lines found in other “delightful villas,” but certainly suggest the Roman way of portraying Diana.
Here in Bollate, the goddess is depicted as a hunter, holding a bow in her left hand and equipped with a broad quiver on her back. Two dogs station on the pedestal next to her, while other two dogs are depicted at the sides of the base. The sculptural and architectonic units are preceded by a small four-lobed basin in stone, with its borders emerging just above the ground, and which once contained the sculpture of a cupid. A little further on is the main fountain, today greatly damaged, and which has a base supported by four monstrous feminine figures, probably Erinyes, bearing on their winged shoulders an oval basin containing the figures of two marine monsters with heads of lions, wings, Triton wings and bodies with interweaving tails. A design of these fantastic figures, still preserved and attributed to the artist, Camillo Procaccini, depicts the two animals on top of a basin that is spurting water, and closely resemble the one shown here. It can thus be assumed that this solution was created and or designed by Procaccini himself. This fountain once gave highly appreciated water shows that dialogued with others hidden in the rest of the gardens and immediately recalled the water shows found in Villa Visconti Borromeo Litta of Lainate. The spurts of water were regulated by a complex hydraulic mechanism which operated through an elevator windmill placed behind the main niche. Small pipes placed on the floor made the unexpected spurts of water emerge, wetting the nobles present. The floor was constituted by nymphs, as was the custom, and white and black river pebbles that formed geometric designs.