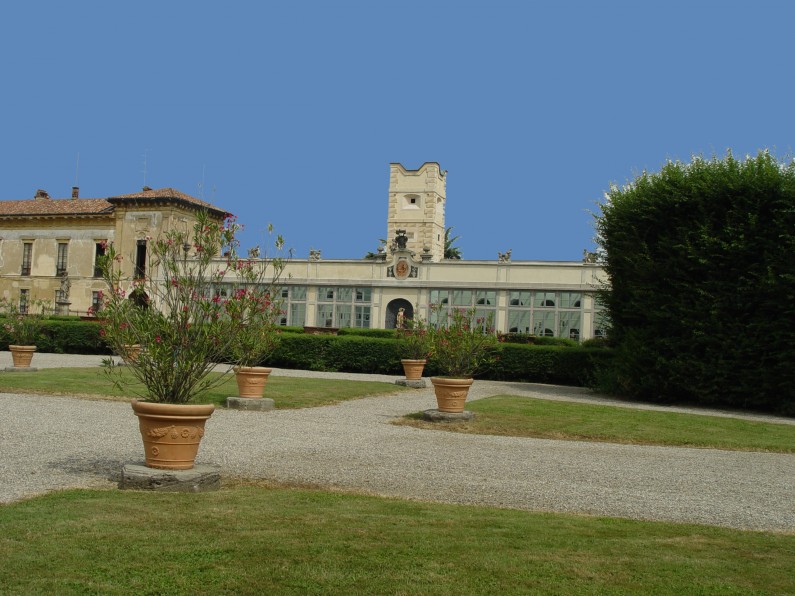 The lemonery is found in the Noble Courtyard and is an extension of the northern wing of the imposing Villa. It is a long rectangular structure, once used as a winter greenhouse for citrus fruits which were exposed in pots inside the park, in the warmer months. The structure, recently restored, is composed of huge windows that alternate with brick pillars and open onto the internal courtyard. In the centre of its façade is a large arched niche decorated with a mosaic of black river pebbles embedded on the walls.

More
In correspondence with the symmetrical axis of the building and the Water Tower, is a brick step that leads to the interior of the niche. A high, white, stone pedestal can be found here and it was used to support a terracotta statue of Bacchus, which was removed and now kept in storage because of preservation problems.
There is an architrave above the lemonery that runs along the whole perimeter, opening at the mosaic niche with a small spiral tympanum containing an oval medallion surrounded by black and white mosaic decorations. With a red background, the medallion represents a scene with a satyr and a seated female figure. Above, a stone cherub presents a coat of arms topped by scrolls containing numerous heraldic symbols of the nobility. On top of the entablature are three sculptured groups formed by pairs of cherubs holding crests between them while the fourth pair crowns a lion.
Behind the lemonery is the Water Tower which in the past centuries regulated all hydraulic mechanisms of the fountains. The interior contained a noria, a water wheel that took water from the ground through a winch operated by a horse. The water was, therefore, brought to higher ground and redistributed through a system of buried terracotta pipes with external elements in lead. The main occupation of the water masters who operated the hydraulic systems of the gardens was to supply the Theatre of Andromeda, centre of a system of redistribution of water to the rest of the park.
Today the lemonery has lost its original function and after its requalification, became an exhibit hall and a place to host temporary events.