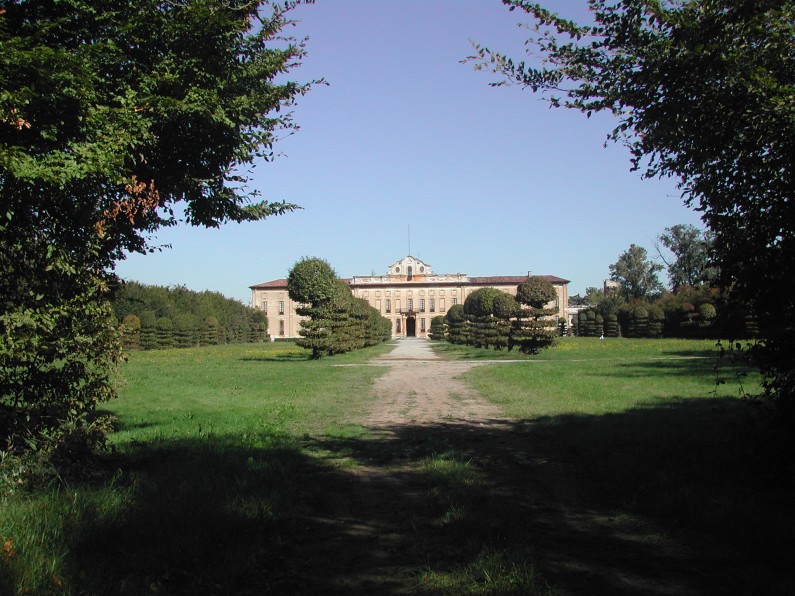 Towards the southern facade of the villa, two long tree-lined walkways stretch out, surrounded by meadows and bushes. These pathways, also called “Bersò” and featuring arbours lined with ornamental plants, are long clay paths with vaults formed by hornbeams that today, still offer a shaded and pleasant trail as a refuge from the summer heat.


More
The walkways were considered real delights, so much so that historical documents recount how in the past, small nozzles were installed in-between the plants to spray water, refresh and likewise surprise the noble guests and visitors. This walkway was planned in an artful manner and the hornbeam arbors united the almost extreme ends of the architectonic complex, for a length of about 300 metres, tracing a semi-cycle stage setting created thanks to the crossing of the two main walkways. Along the central axis, left free from trees and flanked by hornbeams, there were plant essences modelled according to the aesthetics of the ars topiaria, meaning the art of pruning trees and bushes to create unexpected or regular, geometric or figurative forms. The creation of these elements were not made exclusively for enjoyment purposes or as places in which to spend playful idle moments of life in the villa, but were almost an obligation for the noble owners of grand lordly homes, who were expected to respect the trends of the times. The creation of the hornbeam arbours or specific areas designated to exalt topiary art was a typical element of Italian gardens, characterized by the rigorous and formal aspect and absolute control of nature.
Currently the trees surrounding the arbours that contribute to the creation of the artistic semi-cycle scenery and Theatre of the eight perspectives, are pruned in a “ballerina” manner, meaning with a cut of overlaid circles, thus giving the impression that the branches and leaves form precisely, the tutù of a ballet dancer. The historical documentation of the villa attribute the design of the trees and hornbeam arbours to Giovanni Gianda of Milan, a simple lover of trees and landscape architecture. The scenic system of the park is thus not attributed to a high-sounding personage of landscape designs, but to a less renowned personage of Lombard culture, who proposed and accomplished the project around the second decade of the 18th century.