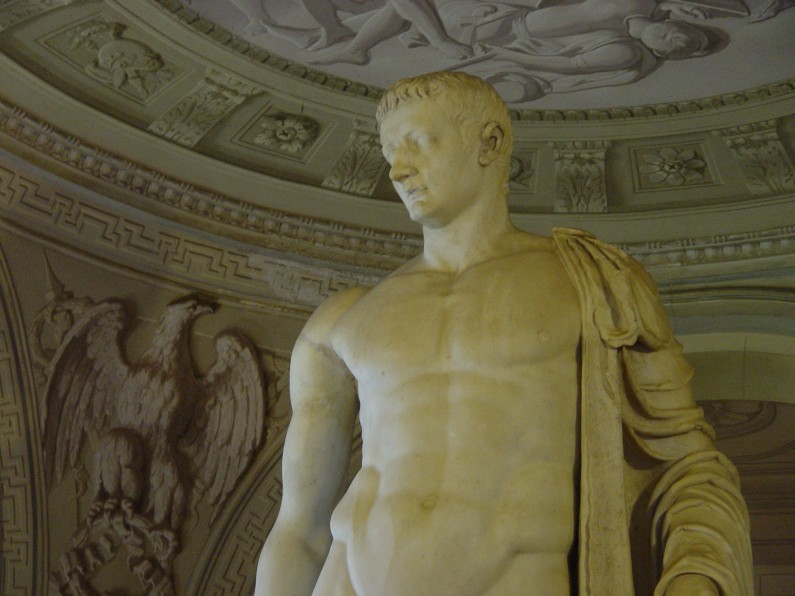 The statue of Pompeius Magnus is one of the most famous items of the Arconati collection. In white marble, and 3.5 metres in height, it is a portrayal of the Roman commander. His left arm is covered only by a drape and his head is turned at a three-quarter angle. In his right hand is an imperial, copper rod which was once golden.

More
Pompeius is depicted with his left hand and palm turned upwards, almost as if he was inciting his army. A monumental figure with a powerful, harmonious body, the sculpture was purchased in Rome, brought to the villa and placed in the theatre bearing the same name, in the villa’s garden which was characterised by the presence of a small ionic temple that was destroyed.
The Statue of Pompeius remained outdoors up to 1742, when Giuseppe Antonio, great grandson of Galeazzo, had it replaced with a copy in order to move the original statue to the villa’s museum.
Galeazzo Arconati had an inscription engraved on the base of the statue as a tribute to Pompeius and his military and political achievements, and this is to be interpreted as a warning against vainglory. The base also contains the inscription of the date the statue arrived in Castellazzo in 1627, the year in which the sanctions for illegal exportation of artistic items from the capital were already in force. However, Galeazzo managed to circumvent these sanctions due to a special permit he obtained also because of his prestige and proven value as a collector of ancient art.
According to an old legend reported by many historians, Julius Cesar would have been murdered at the foot of this statue. Historians today consider this belief to be without any concrete basis. They see this statue as only one of the many sculptures circulating in Rome and identify this manly portrayal as Tiberius and no longer as Pompeius Magnus.