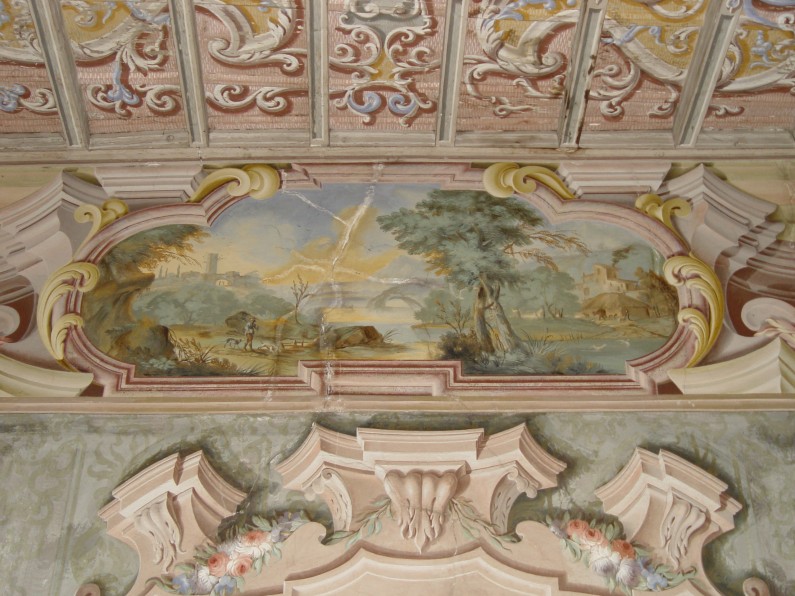 The hall today called “Hall of Terrestrial Landscapes” is mentioned by some sources as the room for private and domestic use, which like the room it precedes, was probably a playroom and entertainment room for the children of the Arconati-Busca household. These two rooms, in fact, gave access to the “Room for Women,” following the layout of the typical 18th-century home, where the private quarters were strictly divided into “rooms” for women and for men.


More
In fact, on the walls are decorative vertical bands that create sinuous shapes reminiscent of twisted racemes and sinuous spirals in shades of green. Unlike the other room, this has a fireplace with a border and marble mantle. The doors are framed by illusory architecture with indentations and scrolls decorated with flowers while the upper part of the wall is decorated with a painted frieze with a medallion in the centre. The subject of the design on the medallion determined the name of the hall itself. The central theme is, in fact, the landscape and mountain scenes, forests and watercourses where animals appeared and men engaged in different daily activities. Mixtilinear frames and illusory architecture that seem like real architectural elements enclose these landscapes. The ceiling recaptures the stylistic choice of the “Hall of Seascapes” and is made of wooden coffers with visible beams and entirely decorated in shades of pink, yellow, white and blue. Arabesques and spirals, along with the usual traces of plant elements make up the rich and varied design that dialogues with colours and motifs and with the other decorations present in the hall.