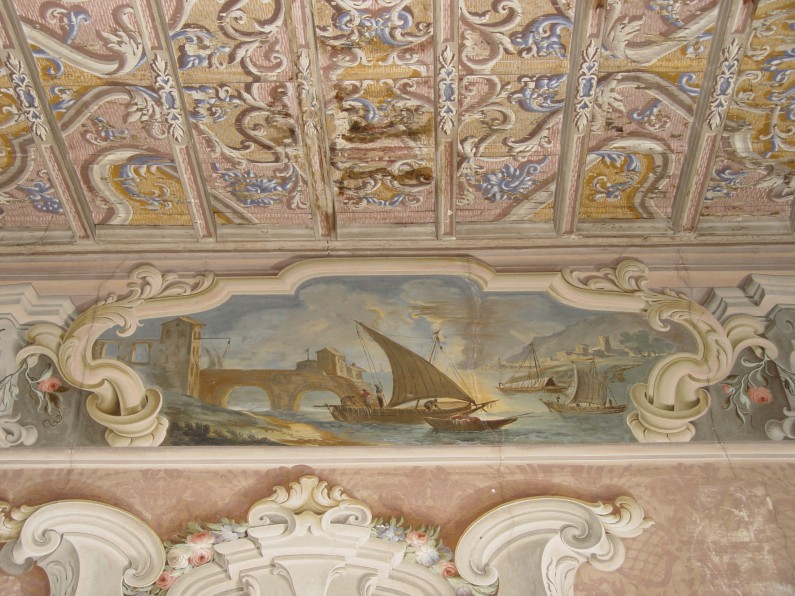 Currently called “Hall of Marinescapes” due to the maritime wall sceneries, the hall was the first room of the upper floor of the villa, assigned as the playroom of the children of the Arconati and Busca families.


More
The hall today is richly embellished on the walls with damask decoration in hues of grey, delineating fantastic and arabesque motifs, together with those that seem to be grotesque motifs, bunched inflorescences and plants painted to resemble rich fabrics that once made up the lavish tapestries of the noble villas of the 17th-18th centuries.
The name of the hall derives from the pleasant paintings appearing on the upper strip of the walls, that is part of a continuous frieze. Inserted in perspective hollows and false protruding architecture, four views open out to marine landscapes. The four medallions are arranged on each side, giving life to a play of cross references and suggestions. The architectonic openings simulate spiral frames with polychrome flowers, and describe scenes populated with fishermen, boats, and villages perched on the rocks, where human activities interweave with the rhythms of fishing and nature. The skies recount peaceful fishing expeditions or, on the contrary, storms on the horizon.
The hall’s ceiling is entirely painted. The wooden beams holding up the coffered structure is painted with white, yellow and blue motifs that intertwine in a play of refined and sophisticated forms, in line with rococo tastes, almost giving the illusion of a relief stucco decoration. The doors are closed instead, in deceiving, elegantly painted spirals, decorated at the tips also with flowers painted in light tones.