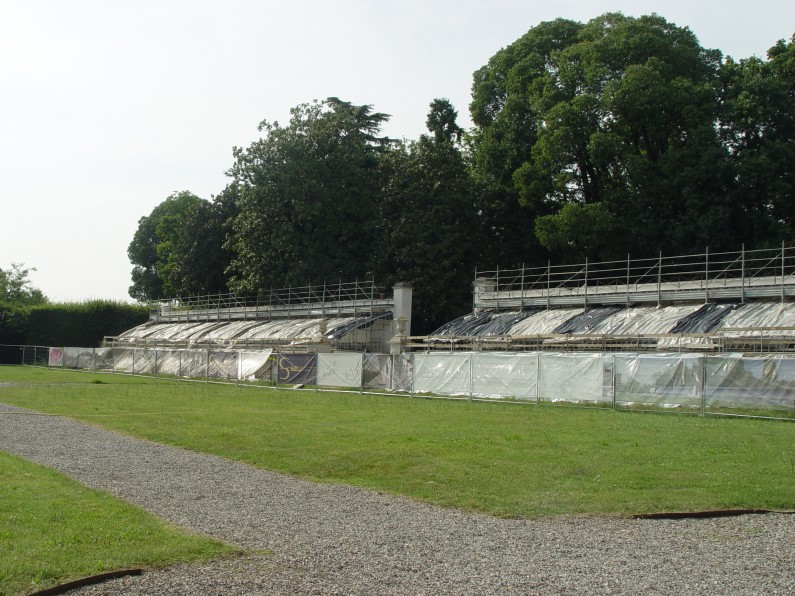 The western section of the Villa entirely designated for vegetation, included several distinct spaces with specific functions; its original design is attributed to the architect, Luigi Canonica (1764-1844) who in the same years also worked at the Villa Reale of Monza.


More
The so-called “Garden of the Hesperides” was made up of a four-sided space enclosed on three sides by a hornbeam arbour specially shaped like a gallery and characterized by the presence of the “Fountain of Neptune” in the centre. The fourth side, facing the north, was defined by two harmonious buildings in iron and glass, which are currently being restored and placed on two different planes so as to conceal the difference in the ground level between the area of the garden and the current park (once called the “New Grove”). The construction of the “Art Deco greenhouse” was intended for planting species from hot and temperate climates, probably at the behest of the Marquis Pompeo Litta IV, and is dated around the time of his death in 1836. The greenhouses were equipped with a steam distribution installation and its boiler and a glass cover supported by an iron frame. However, it was subjected to a series of expansions and structural changes between 1892 and 1898.
The Villa was also equipped with other greenhouses located at the end of the garden, at the sides of the niche containing the terra cotta sculpture of the “Rape of the Sabine Women”. There are cold greenhouses, intended for winter storage of citrus, and heated greenhouses designed for the conservation of the exotic species. The latter, made of glass and wood, were heated through openings placed along the sidewalls, from which flowed the heat produced by heaters in the large semicircular cellar under the exedra.