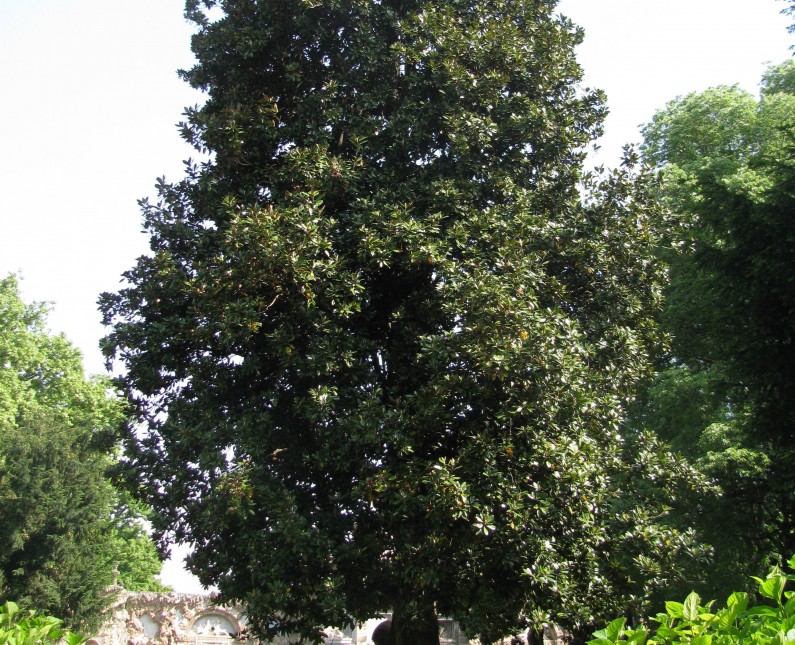 The lawn in the formal garden of Villa Visconti Borromeo Litta in Lainate was divided into sections with a curvilinear perimeter in the 19th century, when it was decided to reorganize the park. Currently a majestic magnolia stands on the turf in front of the entrance to the water tower of the Nymphaeum. Its pyramidal shape and unmistakable green leathery leaves at the upper surface and rust coloured ones at the bottom and during its flowering period, contribute in eliciting feelings of wonder and delight for its creamy white fragrant flowers.

More
“The flower itself is a shining beauty. I just looked in the heart of one of them. The fabric of the petals is a thick cream; they should not be called white, because they are ivory, if you ever can imagine ivory and cream colours combined into a thick paste, with all the softness and smoothness of a young human skin. Its fragrance, evoking the lemon, is unsustainable.” With these words, an English writer described the beauty of this tree that imposes itself on the visitors of the villa of Lainate. Here visitors can see the reddish ovoid fruits that are grouped around a central axis 10 cm long. Once mature they open, letting out beautiful, ruby red coloured seeds and an intense aroma.
The inclusion of this tree in the park of Villa Visconti Borromeo Litta certainly did not belong to the early stages of the park design, because the first specimen of this plant came to Nantes from America in 1740. Linnaeus, a Swedish physician and naturalist, gave the name in honour of the French botanist, Pierre Magnol.
Its ancient history was certainly not unknown to the botanists who planted it in Lainate and it is easy to think that the noble owners delighted in the discussion with guests of the villa, about the long journey that the tree made to arrive in Lainate from its exotic origins. The Magnolia, in fact, is native to Asia and America, and it is a very ancient plant, considered by scholars as one of the first flowering plants that appeared on the planet; we know that today because a number of its fossil imprints date back to five million years ago. The specimen of Lainate not only shows the typical grandeur of this tree but also the characteristic pyramidal shape with its rich foliage. The entire margin of the evergreen leaves are so tough that they crackle in the rain or if moved by a light breeze. The trunk branches out from the base and the greenish gray bark presents few cracks even in older trees.
Although in the country of origin magnolia trees reach heights of around 30 meters, this type has an average European height no higher than 15 meters.
It is a slow-growing plant and does not flower before 20 years and lives very long. It grows well on fresh and acidic soils, but not on calcareous soil.
Although it is a rather delicate tree which suffers winter frosts, it is a common species in the gardens of country residences of Lombardy. Some examples worth noting are those in the romantic garden of Villa Cusani Tittoni Traversi in Desio, or in the park of Villa Crivelli Pusterla in Limbiate, where once you could walk under the shade of these gigantic trees delighted by the play of light filtering through the foliage of a mixed forest of magnolia, beech, lime, oak, yew, ash and maple trees.