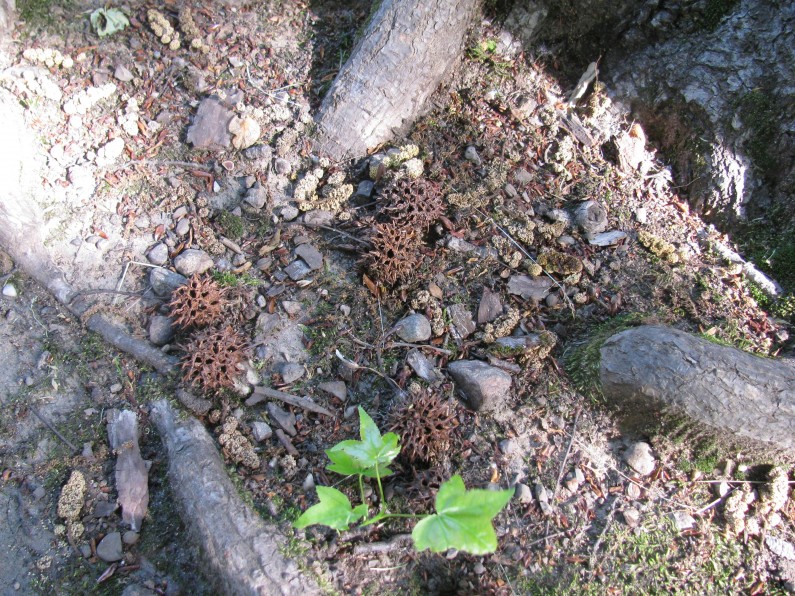 The sweet gum tree has a large trunk and belongs to the Altingiaceae family. It grows rather slowly in the early years of its life. The leaves are similar to those of some species of maples and in autumn turn into shades ranging from red to lemon yellow, violet and pink.


More
In Europe, this plant was introduced in 1681 as an ornamental tree but it immediately became popular with botanists and landscape architects for its bright colours of autumn. For this reason, the sweet gum is widely used in parks and gardens of noble villas as decorative trees.
In the romantic garden of Villa Visconti Borromeo Litta in Lainate, strolling along the rolling paths and under the shade of tall trees, one can observe the sweet gum tree in all its majesty with its large rounded crown that has developed with age.
The simple and sharp leaves with five lobes and serrated outline, unlike those of the maple trees, are alternate on the branches and bright green in colour.
The bark is grey in colour and smooth at first, then with the passing of decades, looks brownish and wrinkled, while the trunk is straight and slender.
Flowers bloom in March and April with inconspicuous inflorescences and separate sexes, present contemporarily in the same plant (monoecious). The male flowers are round and yellow and grow in clusters, while the female flowers are small and grouped in a dense inflorescence.
The name recalls “liquid amber” for the simple fact that if an incision is made on the bark, a resin called burnt styrax comes out and produces a very persistent aroma. It is also used to produce adhesives, ointments, perfumes and incense.
In one of the flowerbeds on the side of the basin of the fountain of Galatea one can admire a young and promising sweet gum tree with brilliant autumn colours and rounded prickly infructescence which turns from green to brown and becomes woody upon maturing. Once dry, some capsules release one or two dark seeds. This young sweet gum replaced the original majestic tree of the same species recently struck by lightning.
ImagesVideoAudio