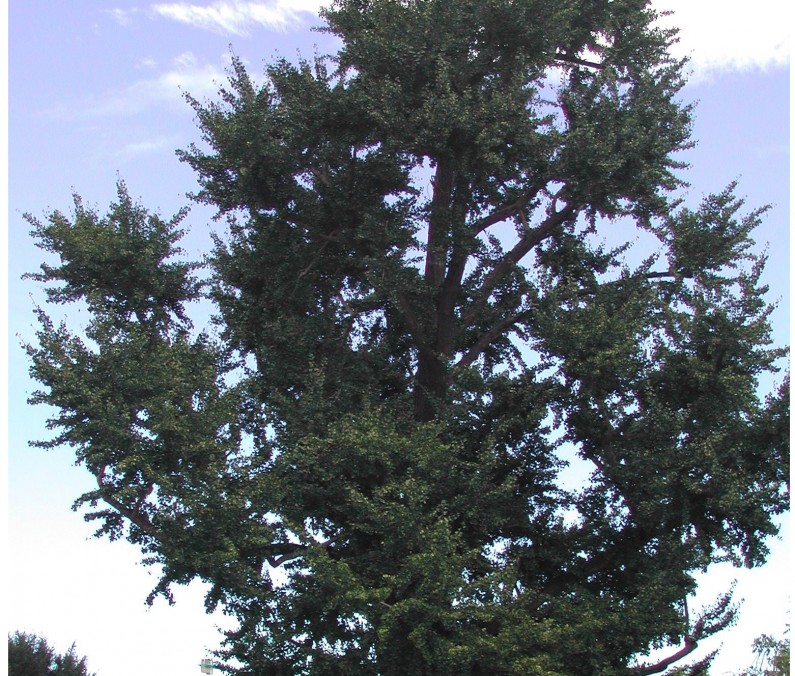 Among the many species of trees inside the park of Villa Visconti Borromeo Litta Lainate, stands a rare specimen of Ginkgo biloba, which is considered a distant relative of conifers and a kind of living fossil.


More
In all likelihood this tree did not belong to the system of the Villa Park of the 16th-18th centuries, but was probably brought to Lainate around 1850. This tree stands proudly inside a portion of the Italian landscaped garden, next to the beautiful fountain of Galatea.
The tree is immediately recognizable by the drooping foliage and its curious fan shape, lobed leaves, which in autumn turn gold before falling. The species also has the distinction of carrying male flowers and female flowers on different trees. Since the fleshy seeds look like green plums on long petioles, which grow on the female plants are foul-smelling, the pathways of the parks of country residences where nobles took walks were usually planted almost exclusively with male plants. However, there are some exceptions such as in the garden of the 19th-century Villa Zari Bovisio, or in the delightful garden of the country residence of the Tittoni Traversi family in Desio, where some female specimens were recently planted along the path that go into what remains of the English landscaped garden behind the building.
This ancient tree adopts a system of rather primitive fertilisation: pollination occurs when male cells reach the ova through a layer of water, a method found only in ferns and a few trees living today.
The trunk specimen planted in the large garden of the Villa Visconti Borromeo Litta is tall and slender, with a brown and cracked bark. It is a very special tree. It has an extraordinary resistance to fungal attack and there is no known disease that can cause damage to the plant and weaken its vigour. It supports without any damage, atmospheric pollution usually toxic to the majority of other cultivated plants.