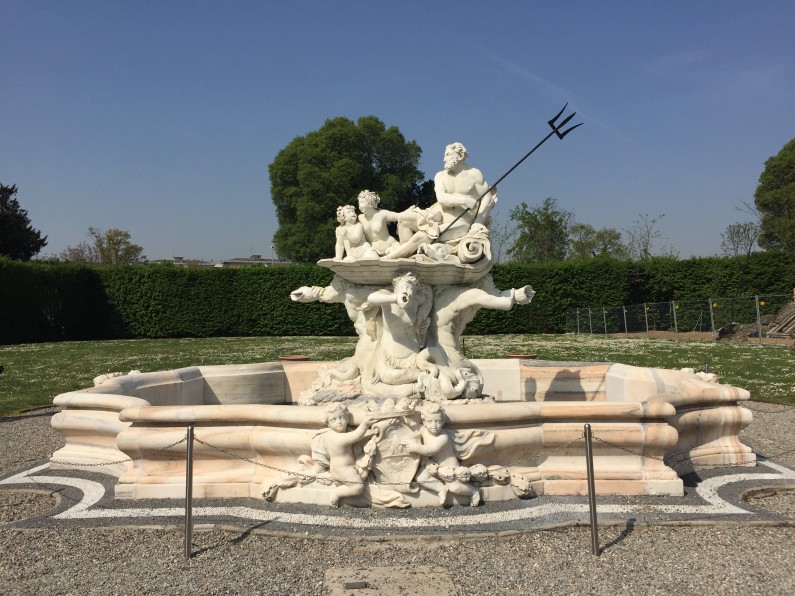 The marble fountain, sculpted by Donato Carabelli (1760-1840), was placed in the mid-18th century on the site where the “Garden of the Hesperides” was originally located.


More
The work consists of a circular basin positioned at the level of the lawn adorned with a pair of cherubs which support the coats of arms of the Litta family. At the centre of this basin are four mythological marine figures, two mermaids and two newts, intent on blowing into shells. On their shoulders rests the large shell on which lies the god, Neptune, accompanied by two small newts crowned with seaweed.
In ancient Roman religion, Neptune was the god of water and later became the god of the sea; Poseidon was his Greek counterpart. According to the traditional iconography derived from the vases and the great Hellenic statuary, he is depicted as a bearded half-naked man, covered only on the belly by a large cloak and holding a trident and his characteristic sceptre. He was frequently represented, as in this case, at the head of sea processions surrounded by Tritons and Nereids or sitting on a chariot drawn by sea horses. His special connection with the water theme made him a particularly suitable subject for mosaic depictions inside the Roman baths and then in the Mannerist and Baroque sculpture as decoration on monumental fountains.