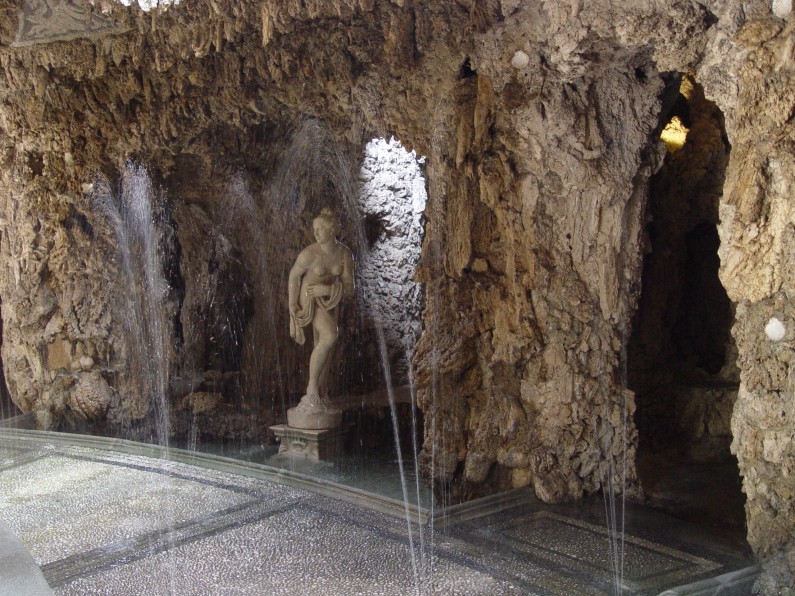 The statue of “Venus in the bath” is one of the most prestigious sculptures of the “Corridor of Statues” which was originally placed in the “Old Grottos” of the Nymphaeum which today has a copy of the original.


More
This sculpture had been produced so as to be scenically placed in the semicircle of the natural grottos located in the eastern zone of the Nymphaeum, together with two other figures of Naiadi-Veneri achieved around 1589 by Giulio Cesare Procaccini based on the design of the sculptor, Francesco Brambilla the Younger. This “Venus in the bath” was instead attributed by critiques to another sculptor, Marco Antonio Prestinari from Como (deceased in 1621) who had worked on the complex, on the basis of its similarities with the statue, “Adonis,” which he sculpted in marble in 1602 for the Nymphaeum garden and today kept in the Louvre Museum in Paris. In both works, in fact, Prestinari translated the models of Brambilla with a different language from that of Procaccini and which came closer to the style of the famous artist, Giambologna, a style that was repeated in an evident manner in the work, “Venus Urania” (1575), today kept at the Kunsthistorisches Museum in Vienna. All these sculptures betray a certain resemblance to the “Leda” of Leonardo, as can be seen upon studying the carton model of the artist, then kept in the Leoni Collection in Milan (but today lost), or in the numerous pictorial traditions executed by the pupils of the Florentine master. To be sure, Giovanni Paolo Lomazzo, director, together with Pirro I Visconti Borromeo of the iconographic and decorative plan of the Nymphaeum, must have sustained a certain leonardesque tendency in the sculptors working in the Villa. In particular, in his numerous writings, it is clear how he sees the “Leda” as the vertex of aesthetic-cultural perfection and a supreme model to be followed to portray Venus, whose regular and sharp features present the characteristic and enigmatic smile of the Leonardo dames, as also the soft hair with wavy curls.
A splendid example of 16th-17th century sculpture, Venus gained over the years, the popular name of Vegia Tuntona, which in the local dialect meant “Old temptress.” Oral traditions in fact, narrate that the people of Lainate who were not allowed to enter the villa and its park, climbed the external wall of the Nymphaeum to look inside the only window opening out to the town, and from which one could see against the light, the sinuous profile of the goddess in a tempting stance, while she was sprinkled by the spurts of water, appearing like an irresistible temptress, immobile and out of reach.