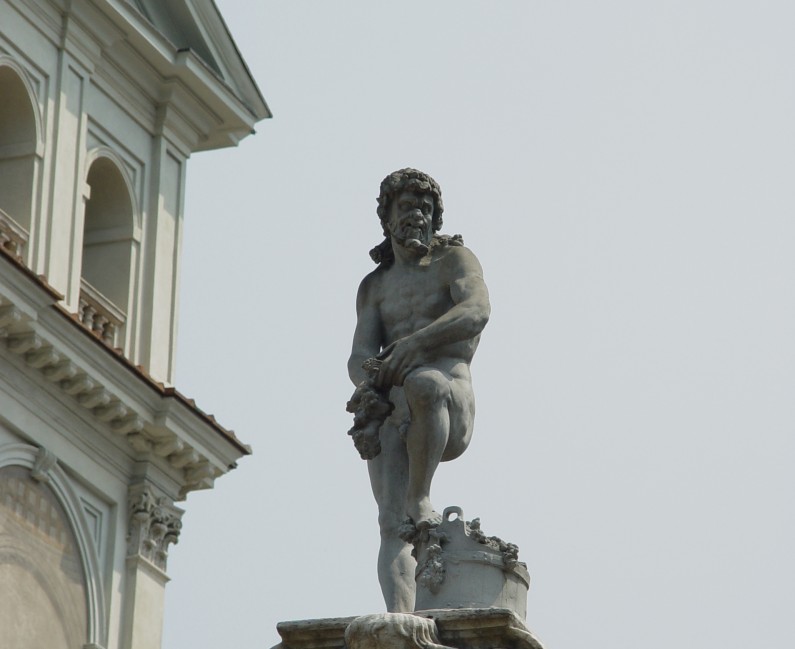 The lead sculpture is a naked male figure standing with his head turned to the right. The man is holding some grapes in his hands, probably picked from the bucket resting on the ground under his left foot. The subject has been variously identified as the Roman god, Bacchus, or because his face is strangely deformed and monstrous, as Silenus, a minor god of the woods, son of the god, Pan, and a woodland nymph.


More
Often depicted with animal physiognomy, this character of Greek mythology, was the tutor of Dionysus as a youth, hence his frequent representation in a drunken state. Legends narrate that after completing his task of accompanying the young god in his journey of growth, Silenus abandoned himself completely to the vice of drinking.
The sculpture positioned in the Hall of Sculptures, was originally placed in the “Courtyard of the Rains” of the Nymphaeum of Villa Visconti Borromeo Litta, an environment rich in the octagonal fountains. In the centre of the small courtyard stands a smooth column, where a marble version of this sculpture rests. Recently, some historians have speculated that the sculpture now kept inside the villa, was a copy of an ancient statue. The figure is linked, therefore, to the sculpture of Bacchus-Silenus sold by the auction house, Sotheby’s, in London in December 2008 as part of the artwork collection of Villa Visconti Borromeo Litta. In this case, the sculpture is about a meter in height sold as the work of a Flemish artist close to Dutch sculptors, Adriaen de Vries (1560-1626) and Willem van Danielsz Tetrode (1530-1587) known in Italy as Guglielmo Fiammingo. This work which was bought in the early 17th century by the nobles of Lainate to enrich the collection of sculptures of the villa, belonged to a long list of works that have emerged in museums and private collections around the world following the dispersions of the 20th century. It was only recently recognized by critics as the model made in Lombardy and its bronze casting.
The relationship between these three statues, the sculpture placed in the Gallery of the Statues, the marble copy placed in the Courtyard of the Rains of the Nymphaeum and the 16th-century work sold in London, deserve a more detailed study. In addition to helping in the further understanding of the artistic heritage of the Villa in Lainate that has been lost, these would also contribute to the knowledge of the art-collecting tendencies of the noble families of Lombardy of the 16th and 17th centuries and the passion shown by museums and art lovers in the first half of the 20th century for Italian and foreign artists active in Lombardy in previous centuries.