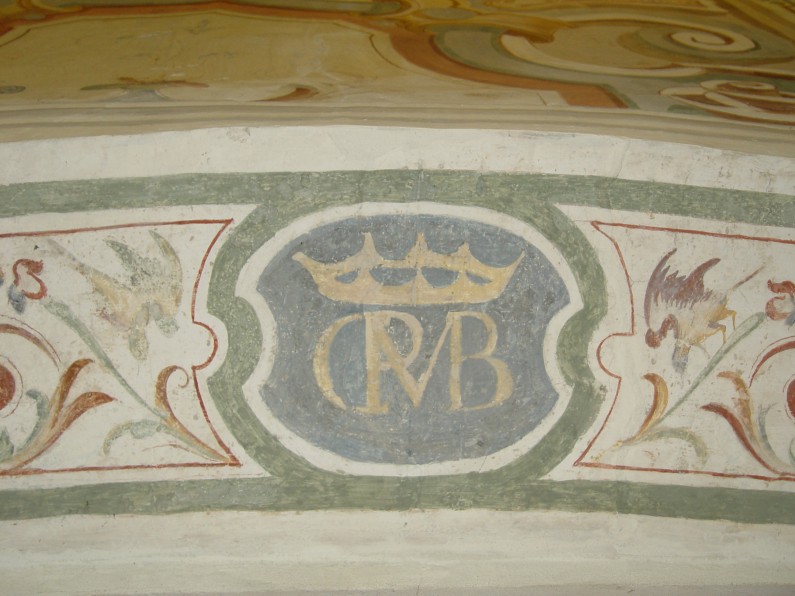 Next to the “Hall of Mirrors” is the “Medoni Hall,” which derives its name from the particular Lombard cotto tiles decorating the central part of the floor, as well as the areas around the doors and windows, called precisely “medoni.”


More
The characteristic paste of the cotto produced manually in Lombardy is also defined as “nutty’ due to the appearance on the tile surface of some blots arising from the mixture of different types of clay. Given that the paste is processed manually with rudimental methods (hoes and shovels), upon pressing the paste into the moulds, some bubbles of air could have remained in the mixture, producing little or big holes on the tiles, that were then reduced by smoothing or deterioration due to treading.
The walls of the hall are decorated with frescoes, laid out with geometrical and plant motifs surrounding the ample rectangular frames containing mixtilinear cornices of different colours. The frameworks, characterised by rich spiral profiles with shells at the two upper and lower extremities, contain in turn an ulterior decoration of plant and floral branches, enriched by the presence of cupid heads, birds, and fantastic or monstrous animals. This type of decoration matched well with the grotesque motifs, already widely used in the ceilings and walls of the Nymphaeum, the decorative campaign of which came about between 1587 and 1589 by the Bolognese painter, Camillo Procaccini (1561-1629), with the collaboration of mosaic operators and masters.
The ornamental oddities alternated with grotesque and ancient motifs, corresponded in fact to the taste of the commissioner of the complex, Pirro I Visconti Borromeo, and that of the entire Lombard artistic environment. The new assemblage from the 16th century onwards, made great use of these types of subjects. The new assemblage derived from the Roman archaeological discoveries that, in those times appeared as underground grottos (from which the word grotesque derives) was in fact used by sculptors, jewel makers, engravers and painters throughout Europe, and spread also due to the numerous artefacts engraved and moulded starting from the mid-16th century. Particularly in Milan, it spread not only on the walls and vaults of churches, villas and mansion but also and above all in the luxury handicraft workshops and flourishing artistic industries producing weapons, that elaborated the most singular ideas in the field of grotesque and embellishment works. It was thus not surprising that Giovanni Paolo Lomazzo (1538-1592), counsellor of Pirro I Visconti Borromeo, in the description of the iconographic complex of the Villa, tried his hand in his youth, precisely in the “composition of grotesque works” as an apprentice of an engraver in iron and precious materials, and that dragons, snakes, harpies, centaurs and other legendary creatures were the protagonists of his imaginations as a writer. Beside these decorations, the hall presents on the small vaults of the doors, the inscription in capital letters “CPVB,” referring to the initials of count Pirro I Visconti Borromeo.