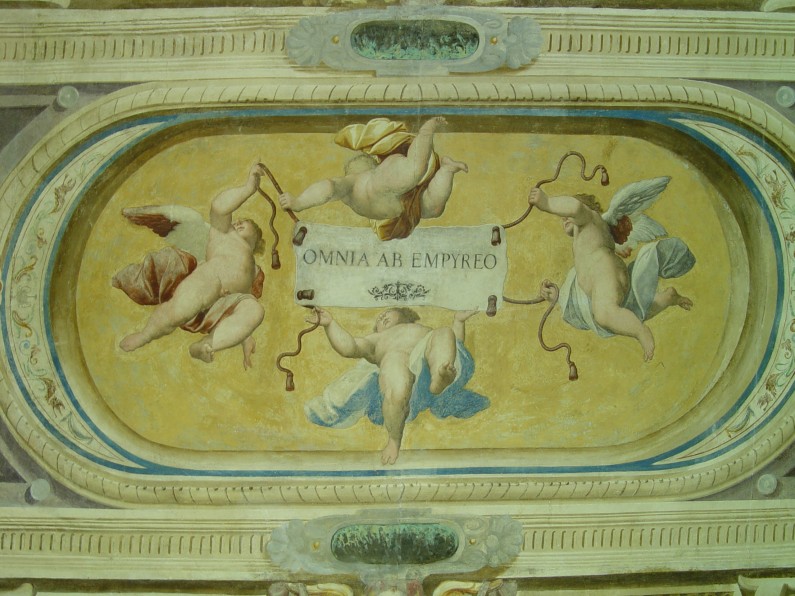 The “Hall of Mirrors,” another important hall on the ground floor, takes its name from the two large mirrors positioned on the minor walls, and like other areas of the lower floor has a Venetian terrace floor, which contrasts with the grand fresco decoration that spans the entire ceiling.


More
Thid exhibit has the same setup as the “Hall of Enea,” situated on the other side of the “Rotunda of Mercury.” At the centre of the ceiling is a scroll bearing the Latin inscription “Omnia ab empyreo” (“All things come down from heaven”), supported on the sides by four cherubs who seem greatly shortened as seen from below, in a bright gold background. The two phrases refer to the devotion of the patron and owner of Villa Pirro, Visconti Borromeo I, reminding his noble guests of Lainate that all things descend from Heaven and return to heaven; and in a more or less subliminal way, that the power achieved by the owners of the house and the legitimacy of his government corresponded to the divine will. Opposing the family of the Villa Visconti Borromeo Litta of Lainate, therefore, coincided with the opposition to God’s saving plan.
In correspondence with the two longer sides of the hall, the central medallion is surrounded by two rich mixtilinear frames containing an interesting variant of the symbol of the Visconti family: the characteristic serpent devouring a child while coiling its body around a red sword topped by a golden crown. At the sides of the emblems enclosed between wide architectural frames decorated with imaginary animals and grotesque heads; there are also land and sea hunting scenes, a sign of great stylistic and interpretive variety. The frescoes portray numerous hunting techniques typical of many areas of the world that show the artist’s painting skills in creating scenes that go from hunting in the forest and capturing a runaway bull, to exotic pursuit of white ostriches on horseback or the traditional fishing in a river to the capture of a whale in open sea.
The decorative work probably dates back to the period between the late 16th and early 17th centuries. Critics tend to assign the execution of the frescoes to the direction of Camillo Procaccini (1561-1629), who was already actively working on the Nymphaeum between 1587 and 1589 and was certainly assisted in making the ceiling frescoes of all the rooms in the ground floor of this 16th-century wing of the villa.
The few administrative notes of Pirro Visconti Borromeo I, registered between 1602 and 1603, lists the names of artists, Agostino Lodola and Giovan Battista Maestri also called “Volpino” who probably collaborated with the artist from Bologna. The extraordinary quality of the hunting scenes were not only limited to the traditional fishing with nets or hunting with dogs but it had a certain fairy tale-like quality about them which stimulated the viewers’ interest for the “rare and wonderful,” typical of the era, which led the critics to suggest that he had been helped by his younger brother, Carlo Antonio Procaccini (1571-1630), master in still life and landscape paintings.