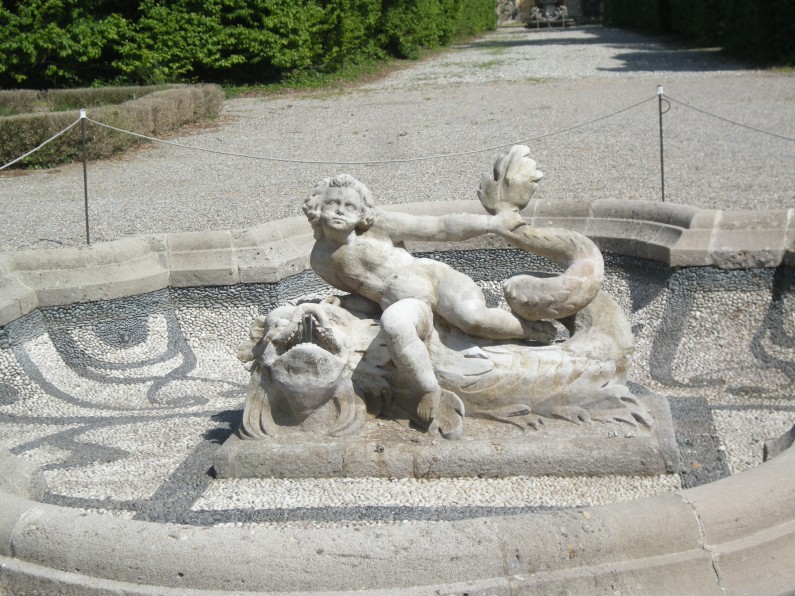 The Dolphin Fountain is located next to the Lemon Grove, just beyond the richly decorated metallic gate delimiting the Noble Court and visually preceding the Theatre of Diana. The fountain consists of a simple, mixed-style basin of a vaguely oval base , with four, big, roundish spirals.


More
On the outside there is a paving of white and black river cobbles composing a mosaic decoration with spiral motifs and geometric shapes that are repeated along the entire perimeter. Among these is an eagle with an imperial crown, an evident tribute to the Austrian imperial family.
The same polychrome and materials make up the geometric designs also found on the inside of the buried basin, from which a group of white marble sculptures emerges. In fact, a marine monster on a rectangular base stands out, referred to by the more reassuring term “dolphin” which appears in the name of the fountain, and sculpted with its head reclining upwards, with bewhiskered mouth open and tail rolled up. A naked half-lying cupid is holding on to it, as if intending to climb over the marine animal. Two tubes emerge from the dolphin’s mouth, which serve to spray the water in playful spurts that fall into the surrounding basin. The overall unit must have been very charming since the fountain is set along the perspective axis that ideally connected the villa to the Theatre of Diana. Through the short flight of steps, the fountain moreover led to the Theatre of Hercules, the lemon grove close by and the monumental pots of lemon trees also disseminated along the parterre all around.