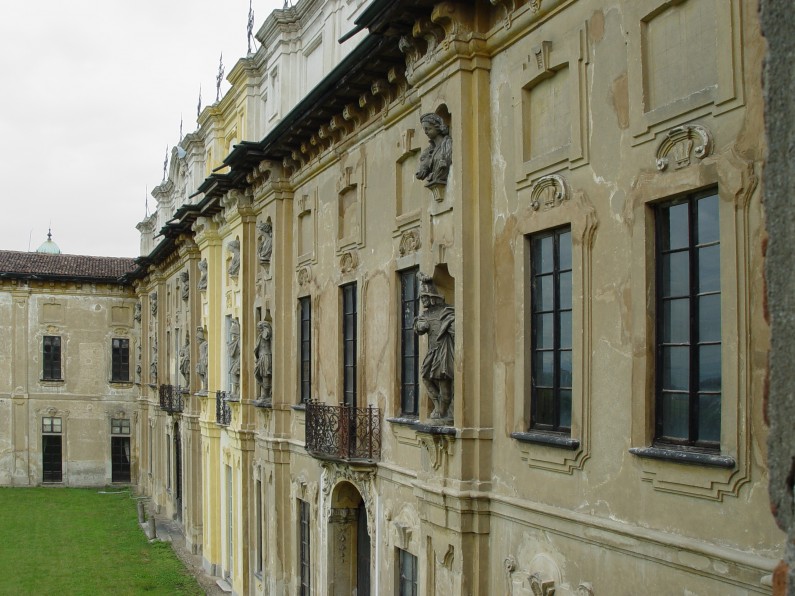 The main façade of Villa Arconati is defined in the artistic and decorative aspects of the 18th-century, as part of the restoration ordered by Giuseppe Antonio Arconati who wanted to build a wing in the southwest portion of the Villa and two access ramps designed by the architect, Giovanni Ruggeri. The design of the latter with new proposed architectural elements in vogue then, had to be integrated with the pre-existing 17th-century construction elements, like the floor to ceiling windows of the upper floors.


More
The façade took the form of a “U,” gaining grandeur and symmetry thus redesigning the layout of the Villa, which planimetrically took the form of an “H.” Divided into two floors by a stringcourse that runs along the whole façade, the main front of the Villa is composed of a regular sequence of rectangular windows. These alternate with a regular pattern broken by the mixed linear pillars characterized by the presence of central frames. Each window is framed by slightly protruding spiral motifs. There are three French windows with wrought-iron balconies that highlight the span of the whole façade and mark the presence of two wide, rounded, arched entrance gates. However, only the one on the right allows direct access to the internal courtyard with a covered porch that covers the expanse of the front façade, as the left portal is only a “simple” French door disguised for the sake of symmetry. The entrance on the right had been designed as the centre of the avenue that leads to the Theatre of Diana, visible even now from a distance.
The main façade of the architectural complex is regular and symmetrical, overlooking a garden that should have been distinguished by the presence of two ramps of stairs that would have taken the guests directly to the Villa’s entrance. However, these were never built and the original design was replaced with a grassy sloping mound decorated with hedges and bushes.
A series of statues and busts of women inserted in niches above the pillars characterize the main floor. Above them is a decorative mixtilinear band with volutes in the ends, which runs the whole length of the central façade. This is driven by rectangular motifs formed in the same thickness of the structure and is further enhanced by the presence of two small volute openings, symmetrically placed with wrought-iron balconies and the portals mentioned.
The graceful tympanum crowning the façade is supported by small jutting brackets topped with decorative elements in wrought iron, in correspondence to the pilasters.