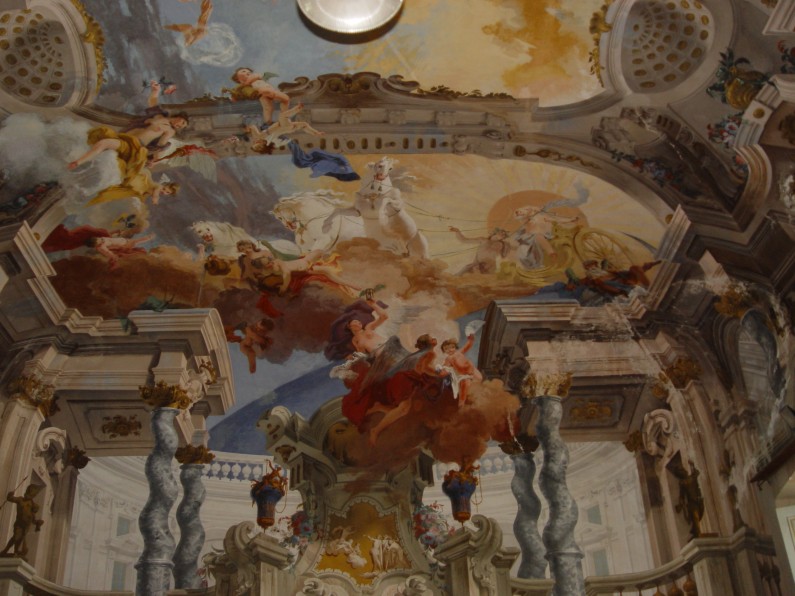 Considered as one of the most important artistic halls of the entire Villa Arconati architectonic complex, the Galliari Hall was Giuseppe Antonio Arconati’s idea, and in 1750 after the completion of the extension works on the villa, commissioned the Galliari brothers, painters from Piedmont specialised in theatre scenery.


More
They were skilled in creating architectural illusions and perspective frames, and in Villa Arconati the Galliari brothers achieved one of their most convincing pictorial tests, allowing them to resume their work in the Milanese society also for the scenic setup of “Europa riconosciuta” used for the inauguration of The Scala Theatre of Milan in 1778.
The first level of the hall is painted with false stuccos with openings in the wall, skirting, niches and cross beams supporting a balcony painted with false protruding parts and twisting marble columns that support an illusionistic opening, revealing a sky filled with figures in motion.
Fabrizio Galliari who specialised in perspective frames, was given the merit for the architecture and the trompe l’oeil effects achieved with the typical tricks of 18th-century painting and its figurative language, that provide for the insertion of figures that seem to lean out from the architectures or vases and protruding statues that seem on the verge of falling. This effect gives the composition original and brilliant solutions that in this hall wisely blend with the perspective frame painted on the short walls, where the real doors, framed within overturned niches, become ulterior cues to lengthen their depth.
Bernardino and Giovanni Antonio are instead given the merit for the figures painted with warm and luminous colours and the design of flowers and garlands, so generously distributed along the entire vault and on the walls.
The main themes on the vault of the hall repeat the classic culture with allegorical-mythological backgrounds depicting the Allegory of Time, the Fall of Phaeton, and the Sun Chariot, in a play of reception with columns, balconies, false spaces, hollows and stuccos. In fact, at the centre of the ceiling are some cupids and a female figure painted in false reliefs while all around, tiny cupids and mythological figures emerge amid orange clouds against a blue sky.
The Allegory of Time is entrusted to cupids holding up hour glasses equipped with polychrome wings and meridians, that appear next to an old man seated on a throne, personifying Death with a long scythe in his hands.
The two main scenes painted on the vault, are instead related to the myth of the disobedient Phaeton who, defying the wishes of his father, Apollo, wanted to drive the Sun chariot, and plunged to the ground after having burnt part of the heavenly vault and part of the earth. Divided into two frames, the scene shows to the left upon entering the ample hall, Phaeton who is asking Apollo’s permission to drive the sun chariot for one day, pulled by white horses he is pointing at with his right hand. On the opposite wall, the young boy plunges to the ground struck by Jupiter’s bolt of lightning.